He's enjoying himself in Japan

Andrés Iniesta bid farewell to Barcelona at the end of last season, when it became clearer that he his legs could not keep up with his brain as well as they once could. He departed Europe for a new challenge in the far east, joining J1 League side 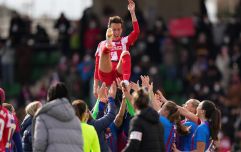 END_OF_DOCUMENT_TOKEN_TO_BE_REPLACED

But the midfield maestro will never lose his ability to thread an eye of the needle pass through a defence or leave a defender dazzled with a silky turn. Admittedly, it is easier to do that in Japan than it is in La Liga.

The former Spain international got off the mark for Vissel Kobe at the weekend when he swivelled past a Jubilo Iwata defender, leaving him for dead before rounding the goalkeeper and slotting the ball into the back of the net. And today he doubled his goal tally for the Japanese club with another beautiful strike.

He danced round oncoming defenders on the edge of the penalty area before unleashing a rocket of a shot into the top left corner of the goal.