"Anyone who likes football, likes Karim."

Those are the words of Zinedine Zidane, uttered back in April, when Karim Benzema was almost single-handedly carrying an ageing Real Madrid team through another season as they adjusted to life without Cristiano Ronaldo. Madrid needed a new hero to step up in times of need, and that player - more often than not - was Karim Benzema, who had emerged from the shadow of his former teammate. 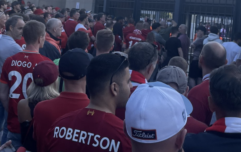 END_OF_DOCUMENT_TOKEN_TO_BE_REPLACED

Zidane was then asked to describe his star player in one word, but had to use two: "the best."

With every passing week, the former Madrid manager's comments reflect an increasingly undeniable truth, and that's why it's time to give Benzema the Ballon d'Or he deserves.

His return to the France set-up after a six year hiatus for off-the-field reasons was cause for excitement among many, but not everyone was convinced it would work immediately. France's premature exit from Euro 2020 would suggest it didn't work, but Les Blues' issues permeated throughout the squad and, as always, into the dressing room (TLDR; Matuidi's retirement was much more of an impediment to France than Benzem's return).

His performances at the tournament spoke for themselves, with one goal in that loss against Switzerland the perfect example of his instinctive brilliance. 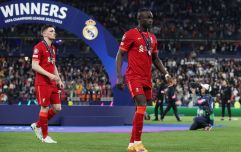 END_OF_DOCUMENT_TOKEN_TO_BE_REPLACED

On Sunday night, Benzema once again stepped up when his team needed a hero. Having gone a goal down to Spain courtesy of a superb drilled finish from Mikel Oryazabal, France set off on a counter-attack just a minute later. After skilfully playing their way out of Spain's high press, Paul Pogba unleashed Kylian Mbappé.

It was then that Benzema made one of his trademark in-to-out runs towards the left channel, leaving Spain's centre-backs with nobody to mark. As soon as he got the ball, it was obvious what he was going to do, and yet Eric García was helpless to stop it. Three touches later and Benzema had curled the ball into the top corner, evoking the type of roar from the crowd reserved exclusively for the best of the best.

What a three minute period this was 😅 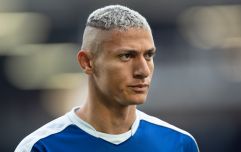 END_OF_DOCUMENT_TOKEN_TO_BE_REPLACED

It is this side of Benzema that we were denied for so many years. Playing alongside Ronaldo at Real Madrid famously denied him the limelight, as the Frenchman became a selfless, tireless facilitator in attack for the nine years they played together. An unsurprising consequence of this was that Benzema's goal tallies often looked underwhelming. Between 2012/13 and 2014/15, Benzema did not reach 20 goals in a league season–not what you'd expect from Los Blancos' number 9.

But looking at Ronaldo's goal record from the same period - 31, 34, 48 in the league - the picture becomes much clearer. Perhaps keeping their original squad numbers at Madrid, with Benzema wearing 11 and Ronaldo wearing 9 for their first season together, would have reflected their respective work for the team more accurately and we wouldn't be having this conversation.

You get the sense that Benzema is a footballer's footballer. The type of player only his fellow professionals truly appreciate. This is demonstrated best in a story told by Paul Clement, formerly assistant manager at Real Madrid under Carlo Ancelotti.

Speaking to The Athletic recently about managing Ronaldo, he explained that Ancelotti had initially planned to use the Portuguese as a central striker - presumably to accommodate the arrival of Gareth Bale while keeping Angel Di Maria in the front three - with Benzema dropping to the bench. But, as Clement recalled: "Cristiano came to Carlo and said he felt more comfortable playing off the left, coming in, making passes, hitting crosses and shots."

And so Ancelotti adjusted his own plans to keep his star player happy, and while Ronaldo did not explicitly mention Benzema in this discussion, it was their relationship that allowed Ronaldo to come inside, make passes and hit crosses and shots so effectively. He was the perfect foil for Ronaldo, and most crucially, did not mind playing second fiddle for the good of the team.

This selflessness in Benzema the footballer is often overlooked, likely because Benzema the man, or people's perception of him.

Not only is he a completely selfless player, but he's one of the most complete forwards to grace a football pitch this century. Much like a young Wayne Rooney, Benzema has the perfect combination of close control, raw power, intelligent movement, and finishing ability. Add to that the fact he is equally capable shooting with both feet, or with his head, and it's easy to see why Madrid have never felt the need to upgrade on him.

With the Ronaldo/Messi duopoly on its last legs, and Benzema racking up 20 goal contributions across all competitions for club and country this season already, a Ballon d'Or feels like a deserved reward for a decade of being under-appreciated.

He faces tough competition for the award, particularly from Robert Lewandowski, whose own goalscoring record continues to defy nature. Jorginho, who played a crucial role in winning the Champions League and European Championships is also in with a shout. But it would be a crying shame if Benzema was not rewarded for a decade at the top of the game with a Ballon d'Or at some point.