England manager Sam Allardyce has been filmed allegedly dispensing advice on how to bypass the Premier League's rules on third-party player ownership.

An investigation from the Telegraph reportedly shows the former Sunderland boss speaking to undercover reporters who the paper claims were posing as representatives of a Far East investment company, telling them bypassing third-party ownership rules was 'not a problem'.

END_OF_DOCUMENT_TOKEN_TO_BE_REPLACED

Third-party ownership, while permitted in a number of leagues across the world, is not allowed in the Premier League.

The ban was officially written into the competition's rules ahead of the 2008/09 season, following controversy regarding the contracts of Carlos Tevez and Javier Mascherano at West Ham United two years prior.

"You can still get around it," Allardyce is quoted as saying in the subtitled video, naming two individuals who he claims have "been doing it for years".

"What they would be better doing is making sure they've got the ownership and the agent. So they own the agent - the agent works for them as well."

"You get a percentage of the player's agent's fee which the agent pays to you, the company, because he's done that new deal at that club again. Or they sell him on, and you're not getting a part of the transfer fee any more, cause you can't do that.

"But...because of the size of the contracts now, the contract'll be worth thirty, forty million, at ten per cent, and...you've done a deal with the agent where you're getting five per cent of the agent's fee, which is massive for doing about two hours' work." 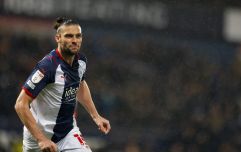 END_OF_DOCUMENT_TOKEN_TO_BE_REPLACED

As per the Football Association's rules on third party ownership for the 2016/17 season, clubs are forbidden from 'enter[ing] into an Agreement which enables any party, other than the Club itself, to influence materially the Club’s policies or the performance of its teams or Players in Matches and/or Competitions.'

At the time of writing, neither the Football Association nor Allardyce himself has commented on the Telegraph investigation.

popular
Two British men raped in Spain after being 'drugged while out on night out'
Groom shocks wedding by playing video of his bride cheating with her brother-in-law
Man has hand 'chopped off' outside working men's club in attack like 'a horror film'
Runner finishes last in 400m race as penis keeps falling out of shorts
Police catch car thief after noticing giant teddy bear is breathing - and he's hiding inside
Brit tourist, 22, ‘raped by wealthy American holidaymaker in hotel toilet’ in Mykonos
Some Stranger Things fans are now trying to cancel Metallica
You may also like
Sport
Man United open to letting Aaron Wan-Bissaka leave the club this summer
Sport
Top 10 Manchester United transfer targets as club plot summer overhaul
Sport
Phil Jones linked with relegation-threatened Ligue 1 side
Sport
Newcastle target in line for 600% wage increase if deal goes through
Sport
Antonio Conte confirmed as new Tottenham manager
Next Page