Football fans across the pond have torn into a fan who interrupted a NWSL game between the Orlando Pride and the Houston Dash to approach American international Alex Morgan.

The pitch invader entered the field armed with a US national team shirt and a phone, awkwardly approaching Morgan before her teammates helped her get away.

Team-mate Brittany Alvarado likened the situation to receiving unwelcome attention at a bar.

When you see your friend getting hit on at the bar by a creep #swerve pic.twitter.com/ngSmaUGxCr

Some have attempted to defend the pitch invader, with an apparent friend revealing that he is banned for life after the incident.

But the wider reaction was one of criticism, with observers noting that no one should feel entitled to an athlete's time when they are going about their business.

dude she's working. Get an autograph after the game like a normal person!

This wasn't a fan coming onto the pitch during a training session, as was the case in the recent incident involving Neymar. This guy entered the field of play during the game, when Morgan and her team-mates had just reduced the deficit to 3-1. 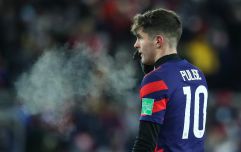 END_OF_DOCUMENT_TOKEN_TO_BE_REPLACED

Many are in agreement that it doesn't really matter if he just wanted a photo and an autograph - Morgan couldn't even be left alone to do her job for the duration of a 90-minute football match without someone demanding her attention.

And anyway, we're pretty sure Morgan doesn't start with a J.

It wasn’t even an Alex Morgan jersey he wanted signed?!?! pic.twitter.com/re2gV7FjQj

popular
Pedophile chugs liquid and dies in court shortly after he's convicted
Lisa Kudrow hits back at fans complaining about lack of diversity in Friends
Landlord faces £40k fine after tenant puts swimming pool on roof of flats
Chilling moment man with knife and balaclava is captured wandering around family's living room
James May 'hospitalised after crashing into wall at 75mph filming new show'
The JOE Friday Pub Quiz: Week 307
Furious Reading and Leeds ticketholders demand refunds as band replaces Rage Against The Machine
You may also like
Politics
Sarah Palin 'Zoom bombed' by drawing of giant penis
News
Naked offender armed with a machete tries to rob man of his clothing in incident captured on CCTV
Crime
Cop explains why officers always touch the back of cars they pull over in the US
News
Woman missing for over week in dense forest found sitting on tree singing 'Amazing Grace'
News
Teen shot dead by boyfriend after being mistaken for a panther in prank gone wrong
Next Page