Alan Shearer's failure to win the FA Cup during his playing days was highlighted by Wembley's big screen before kick-off between Manchester City and Watford on Saturday.

Joining host Gary Lineker and Ian Wright, Shearer was the only man in the BBC's cup final studio to never lift the trophy, and made it clear from the off that he had come prepared for a few mentions of this point...

Alan Shearer gets in early before Gary can tease him about his FA Cup medal haul!

He probably wasn't prepared, however, for Wembley's big screen operators to be in on the joke...

A few minutes into the BBC's coverage, Lineker pointed out how the stadium's screens would be used for VAR decisions. As the camera cut to one of them, they displayed a graphic, showing the former Newcastle striker had never won the competition, while his two colleagues for the afternoon had. 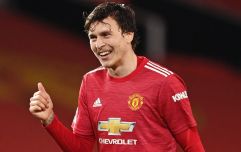 END_OF_DOCUMENT_TOKEN_TO_BE_REPLACED

It didn't stop there, either. Seconds later, a message reading 'SHEARER'S NEVER WON THE FA CUP' flashed up.

Something tells us is probably was...

Shearer reached consecutive finals with Newcastle in 1998 and 1999, losing them to Arsenal and Manchester United respectively.