Aguero 'spends at least £90,000' on gifts for Man City staff after leaving club

Blues all over will still be trying to keep themselves together following Sergio Aguero's bittersweet departure from the club after 10 years at the club. Pep's post-match following the trophy lift showed just what he meant to the club and it's clear that they meant a lot to him. 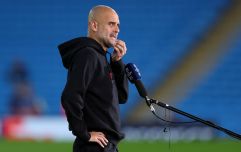 END_OF_DOCUMENT_TOKEN_TO_BE_REPLACED

After the official announcement that the 32-year-old would link up with fellow Argentinian, Lionel Messi, on a two-year deal at Barcelona, according to The Athletic's Man City correspondent, Sam Lee, Aguero has thanked all the staff with extravagant gifts.

More than 60 employees are said to have received either a Hublot or a Tag Heuer Formula 1 model watch. To put that into numbers, Hublots retail at around £8,000 a pop, while the specific Tag model he selected is worth anywhere between £1,250 and £1,650. Dayum. Each watch was engraved with the message, "Gracias! Kun Aguero". Baller by name, baller by nature.

However, the club legend didn't stop there: he also gave each staff member a raffle ticket for a chance to win a Range Rover Evoque - the very same car he, himself, had just purchased. The swanky SUV went to one of the kit men, who Kun is believed to have admired for his work ethic, as I'm sure he does with everyone.

Totted all up, it is estimated he spent at least £90,000 on parting gifts. Blood Nora. Aguero turns 33 tomorrow and rather than worry about his own celebrations (a move to Barca was surely an early birthday treat in itself), he was more concerned with showing appreciation, gratitude and respect to his colleague for the past decade. Lovely stuff.

Doesn't matter whether you're a City fan, a United fan, or any other team for that matter, Aguero will go down as one the all-time Premier League greats and, as it happens, a top bloke to boot. All the best in Barca, lad - we're sure he won't struggle for goals in that team.

popular
Shipwrecked mum found dead saved her children by breastfeeding them at sea
The JOE Friday Pub Quiz: Week 261
Grimes says baby X Æ A-XII calls her by first name as she doesn't identify with 'mum'
'Gleeking' is the 'disgusting' bodily function that most people don't know they can do
Man eats ‘world's biggest burger’ in front of vegan protestors
Missing Instagrammer Gabby Petito's last text suggests 'she may have been 800 miles from last sighting'
Man has hand ‘chopped off at the wrist in London after vigilantes corner him’
You may also like
Sport
Man City fans hit out at Pep Guardiola after attendance appeal
Sport
Pep Guardiola calls for more Man City fans to attend Southampton match
Sport
QUIZ: Name every city to host a Champions League final since 1992
Sport
Pep Guardiola denies saying he will leave Man City next season
Sport
Kevin De Bruyne and Phil Foden fall for prank in FIFA ratings reveal video
Next Page