He's been linked with Liverpool and Manchester United in recent months, and now it seems Adama Traore isn't entirely happy with life at Wolves. 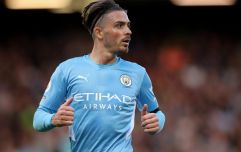 END_OF_DOCUMENT_TOKEN_TO_BE_REPLACED

The Spanish international has been a key player for the club since they signed him from Middlesbrough shortly after sealing promotion back to the Premier League in 2018. Although it was widely expected his good form would result in a an improved contract at Molineux, discussions over an extended deal have seemingly reached deadlock.

According to The Athletic, Traore is of the belief that the new terms being offered by Wolves don't reflect his true value to the club. Not only that, a source also adds that the player believes his reluctance to sign the deal has resulted in him being left out of the Wolves starting XI in recent weeks.

"Adama thinks it could be part of a strategy to get him to sign a new contract, but he does not want to," the source is quoted as telling the publication. "So that's why [he thinks] he's not in the team. He's a bit p***** off, to be honest."

The same report contains quotes from a separate source who rejects this, claiming that Nuno Espirito Santo's decision to use him as a sub has been motivated purely by football reasons - namely the good form of Daniel Podence.

Traore's current deal with Wolves only expires in 2023, so there is not thought to be any sense of urgency to resolve the contract standoff in the imminent future. With that in mind, a January transfer seems unlikely, but should Wolves decide to cash in, it's highly likely they wouldn't consider anything south of the £18m the paid to bring him to the club two years ago.