An absolutely incredible fistfight breaks out in Australia vs. Philippines match

This isn't handbags. This is a full on fight

Over the years, sports fans are accustomed to seeing various skirmishes, scraps and shemozzles on the playing field because sport is a passionate affair where tempers can frequently boil over. END_OF_DOCUMENT_TOKEN_TO_BE_REPLACED

This being said, it's rare that you see a genuine fight flare up where the participants could end up going to jail.

Sadly, this was the case in the recent FIBA World Cup qualifying clash between Australia and the Philippines.

With four minutes left in the third quarter, all hell broke loose at the Philippine Arena as Australia lead by 79-48.

As you can see in the footage below, there's plenty of punches thrown, flying digs, people kicking each other and in one case, it appears that some of the coaching staff and substitutes even join in as someone is pinned to the floor. 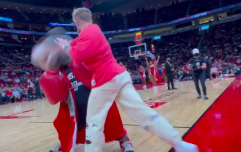 END_OF_DOCUMENT_TOKEN_TO_BE_REPLACED

After this carnage ended, officials eventually removed 13 players from the game and in a very odd turn of circumstances, the match was allowed to carry on despite the fact that the Philippines only had three players left for the remainder of the quarter.

The match was eventually forfeited by the Philippines at the close of the third.

Take a look at the unsavoury scenes that unfolded.

What a disgrace! Phillipines should be expelled from basketball. Safety concerns for Australian side. #basketball #fiba #boomers pic.twitter.com/QoC8ujiP4h