Details of a night of absolute horror are slowly emerging today as France tries to come to terms with more than 120 deaths in Paris on Friday night.

The city was put on lock-down after eight terrorists attacked innocent people at venues across the city, including outside the Stade de France, where Germany were facing the hosts in a friendly.

During coverage of the game a loud blast was heard by spectators both inside the venue, and on television by viewers at home. 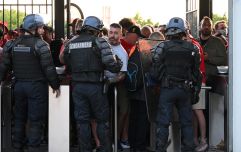 END_OF_DOCUMENT_TOKEN_TO_BE_REPLACED

Reports suggested that the loud explosion was located at Gate J of the stadium, and the Wall Street Journal is now reporting that it was caused by one of the terrorists detonating a suicide vest.

However, more troubling is their revelation that the man in question had a ticket for the game, and was actually denied entrance to the match. 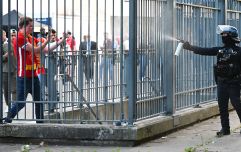 END_OF_DOCUMENT_TOKEN_TO_BE_REPLACED

The guard, who the newspaper is only describing by his first name, Zouheir, admits that the terrorist tried to enter the 80,000 capacity stadium, which was full, about 15 minutes into the game but was stopped when a guard detected the explosive vest under his clothes.

As he backed away from the turnstile, it is believed he detonated the a suicide belt packed with explosives.

It is believed another attacker also detonated a suicide vest at another entrance just minutes later, while a McDonald's near the stadium was also targeted. The entire attack around the stadium resulted in the death of three people.

The revelations indicate that if the bombers had not been stopped, scores more people could have been killed in the initial explosion, or a possible stampede triggered by the explosions.

popular
Groom shoots friend dead by mistake after firing shot in celebration at his wedding
The JOE Friday Pub Quiz: Week 300 - the Triple Century
'Dinosaur lady' wins internet with baffling Question Time remark on rail strikes
Seven awful films rated higher than Pogba’s “Pogmentary” on IMDB
Russian missile does a U-turn during malfunction and smashes into troops who fired it
Swimmer who dramatically fainted during artistic routine banned from World Championships final
Johnny Depp's lawyer Camille Vasquez annoys fans amid rumours she may defend David Dobrik
You may also like
News
Man 'dressed as old lady in wheelchair attacks Mona Lisa with cake in bizarre climate protest
News
Paris to host Champions League final after UEFA strip Russia of showpiece game
News
Piers Morgan calls Naomi Osaka a 'brat' for not speaking to press despite his own TV tantrum
Life
There's a high chance you've kissed the lips of this drowning victim from the 1880s
News
Two people shot, one dead, outside Paris hospital
Next Page