Anyone who grew up watching the 1994 and 1998 World Cups will remember Trifon Ivanov.

The maverick Bulgarian defender stood out at those tournaments for his unique approach and distinctive appearance, which earned him the nickname 'The Bulgarian Wolf'. 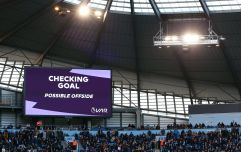 END_OF_DOCUMENT_TOKEN_TO_BE_REPLACED

We're sad to announced that Ivanov has passed away from a heart attack at the age of just 50.

Tributes have been pouring out for the former centre-back, who played in countries including Spain, Austria and Switzerland during a distinctive career.

He will be best known for his involvement in Bulgaria's remarkable run to the semi-finals of the 1994 World Cup, where they eventually lost to a Roberto Baggio-inspired Italy.

Oh, and he could be handy going forward too.

Sad news about Trifon Ivanov. Amazed and terrified me in equal measure during USA 94. RIP.

Bulgaria legend Trifon Ivanov has died of a heart attack at the age of 50. RIP, Tunyo, and thanks for the glorious memories.

popular
'Super recogniser' draws 'accurate' modern Maddie McCann to help police find her
Mum in jail for murder pays tribute to son, 6, killed by his dad and new girlfriend
The JOE Friday Pub Quiz: Week 272
Bellingham and Haaland criticise refereeing performance after Bayern Munich defeat
'I did three grams of coke during a game': Inside football's problem with Class A drugs
Chilling video shows moment step mum tried to get away with murdering boy, 6
Jack Wilshere could be set to resume career with National League Wrexham
You may also like
Sport
Denmark to replace kit sponsors with 'critical messages' for Qatar World Cup
Sport
Otamendi violently elbows Raphinha before hurling him up from the ground
Sport
England record biggest competitive win ever against San Marino
Sport
Loud bang heard outside San Marino stadium hours before England game
Sport
Spain confirm Cesar Azpilicueta is 'safe and sound' after Zlatan challenge
Next Page