Jonny May shreds France with first-half hat-trick for England

May ripped through the French defence after just two minutes when Elliot Daly capitalised on a French turnover before beating a couple of defenders and dinking a kick towards the French line where May raced clear to score. 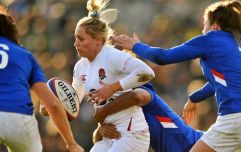 END_OF_DOCUMENT_TOKEN_TO_BE_REPLACED

The Leicester Tigers winger then added his second try of the game when he danced his way past Damian Penaud to score after just 23 minutes.

May then completed his hat-trick just before the half-hour mark when he jumped on the end of a Chris Ashton grubber kick to score in a blistering first half hour in London.

Penaud did ultimately redeem himself when he finished off an excellent counter-attack by France with full-back Yoann Huget searing through the English defence, including fending off the challenge of May, before sending Penaud racing away towards the corner to score.

popular
Stranger Things: Spotify will choose which song would save you from Vecna
Tourist dies after losing arm and leg in shark attack at popular resort
Jordan Peterson suspended from Twitter over Elliot Page comment - says he won't apologise
Adele fans have 'mad respect' for her after she stopped her Hyde Park gig to help someone in distress
Woman sells pics of her thumbs on OnlyFans for £4,000
The JOE Friday Pub Quiz: Week 301
Threesome sees 60-person brawl break out on cruise ship, says passenger
You may also like
Sport
Former England Under-21 captain open to playing for Ireland
Sport
England in ‘Group of Death’ at 2022 World Cup – new study suggests
Sport
Danny Care and Billy Vunipola make 36-man England squad for Australia
Sport
Eddie Nketiah and Tariq Lamptey close to switching international allegiance
Sport
Gareth Southgate says 'WAG' is a 'disrespectful' term
Next Page