Sources say a "disgruntled staffer" is behind the edit

In a bizarre series of events, a US Government website says Donald Trump's presidency ends at 19:49pm ET this evening.

Journalist Seth Abramson uncovered the message when he accessed the US State Department website at 15:02pm ET today (20:02pm GMT).

Abramson described the development as a "bizarre website edit".

On closer inspection, it also became apparent that a similar edit had been made to the page of Mike Pence, incumbent Vice President. This edit claims Pence's term ends at 19:41pm ET.

According to BuzzFeed, a "disgruntled staffer" is behind the bizarre website edits. 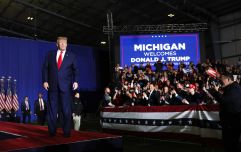 END_OF_DOCUMENT_TOKEN_TO_BE_REPLACED

A US government source told BuzzFeed that Secretary of State Mike Pompeo would be launching an investigation after Trump and Pence's biographies were edited on Monday afternoon.

The strange website edits come just a matter of days after Pro-Trump insurrectionists stormed the US Capitol in Washington DC, attacking police and attempting to overthrow Congress.

Many people believe Trump incited the violence, as it succeeded his 'Stop The Steal' rally held outside the Capitol building.

A number of Democrats have begun filing impeachment processes against Trump, and there have also been renewed calls for Vice President Pence to invoke the 25th Amendment. This would see President Trump ousted from office.

Arnold Schwarzenegger is one such person that believes Trump instigated violence at the US Capitol.

He said: "President Trump sought to overturn the results of an election, and of a fair election.

"He sought a coup by misleading people with lies."

Trump refused to accept Joe Biden as the presidential election's projected winner on November 7th, and has constantly referred to the election as "fraudulent".

No evidence of this has ever been proven, but Trump persisted with the claim in speeches before and after violence at the Capitol building.

Those involved in the attempted coup undermined democracy and the fundamental principles underpinning the United States, according to Schwarzenegger.

"They did not just break down the doors of the building of American democracy. They trampled the very principles on which our country was founded."

popular
Ricky Gervais finally says what we're all thinking about the Johnny Depp Amber Heard case
Binley Mega Chippy: What is it and why is it all over my timeline?
New Time Traveller's Wife series airs 'incestuous' oral sex scene that has left everyone divided
Japanese man spends £12,480 to look like a border collie - and it kind of works
Wimbledon to drop Mrs and Miss on women’s honours board to match men's titles
Gangland enforcer charged £6K to attack victims with acid and £10K to blind them
The JOE Friday Pub Quiz: Week 296
You may also like
News
Elon Musk says Biden only won the 2020 US election because people 'wanted less drama'
News
Elon Musk says he would allow Donald Trump back on Twitter after 'foolish' ban
News
Donald Trump channels Piers Morgan and storms out of interview after branding him a 'fool'
Life
Trump hasn’t posted on his own social media app since its launch following technical difficulties
News
Trump says Putin keeps using "the N-word" on live TV - but he means nuclear weapons
Next Page