Will we ever see this sole-destroying act in all its glory?

A Trump advisor who vowed to 'eat his shoe' if Joe Biden won the presidential election is now refusing to go through with his promise.

END_OF_DOCUMENT_TOKEN_TO_BE_REPLACED

Harlan Hill is a political consultant and commentator, and worked as an advisor to Donald Trump. He made this rather bold prediction while a guest at Steve Bannon's election night party.

Instead of fulfilling his promise, Hill has continued to peddle the myth that the 2020 Presidential Election was fraudulent. Such false claims have been made by Trump, his allies and supporters ever since Biden was projected winner on November 7th, 2020.

These claims have never been substantiated.

At the time of Bannon's election party, Hill said he was "one hundred per cent sure" Trump would defeat Biden. He then went even further, claiming "I'll eat my shoe. We'll do it in a livestream" if Trump actually lost.

Hill during an appearance on Fox News in 2016. (Fox News YouTube)
Advertisement 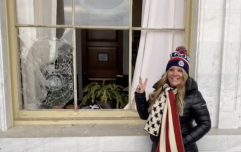 END_OF_DOCUMENT_TOKEN_TO_BE_REPLACED

Biden was inaugurated on January 20th, 2021, becoming the 46th President of the United States in the process.

Naturally, Hill faced renewed calls for him to do the honourable thing - and eat his shoe on a livestream. The 31-year-old was asked by Mediaite if he would go through with his plans, to which he replied "Trump won".

Hill, like many close Trump allies, has long held the mistaken belief that the recent election was illegitimate.

On December 2nd, he tweeted "Democratic mob bosses have stolen an election and undermined the democratic process".

"Trump was robbed," he added on December 15th, also on Twitter.

END_OF_DOCUMENT_TOKEN_TO_BE_REPLACED

Back in October, Hill courted controversy when he tweeted "Kamala Harris comes off as such an insufferable lying b****".

Since Biden has been in office, he has set about overwriting many Trump administration policies. Recently, he lifted the ban on transgender individuals serving in the military.

The armed forces will no longer be allowed to de-enlist a serving soldier on grounds of gender identity.