A contract to provide school laptops has been awarded to a wealthy Conservative Party donor, according to reports. The contracts amount to almost £100 million.

With the closing of schools across the UK due to the coronavirus crisis, online learning has become essential - but there is a shortage of school laptops. In order to provide sufficient supplies, the government have awarded a number of contracts to companies in the field. Some of these have questionable ties to the Tories.

According to the report published in the Byline Times, "contracts worth almost £100 million for the provision of school technology equipment" were awarded to IT company Computacenter.

Computacenter does have extensive experience in the field, though the people behind the business are alleged to have ties to the Tory Party.

The company's co-founder Sir Philip Hulme has made donations to ex-MP Nick Herbert. Hulme's wife Janet also donated a whopping £100,000 to the Conservatives ahead of the 2019 General Election.

In early December, the Byline Times report states that: "the Government released details of two contracts awarded to Computacenter for the provision of 59,900 devices, worth a total of £12.4 million. These devices were required to be delivered to the Department for Education (DfE) by 13 November". 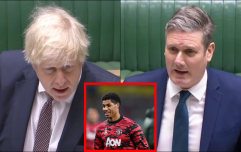 END_OF_DOCUMENT_TOKEN_TO_BE_REPLACED

The current Conservative administration has faced repeated criticism over its alleged nepotism, and the awarding of contracts to those with ties to the Tories.

In an email to JOE, the Department of Education insisted that proper competitive procedures were followed, and that the "decision to contract with the chosen firm was taken following a competition under crown commercial services framework".

Any allegations of favouritism, the department said, were "fundamentally untrue".

Outside of the school laptop debate, this week the government reintroduced food vouchers - after a furious backlash online.

Twitter user @RoadsideMum shared images of the free school meal package she received - with which she is expected to feed her family for 10 days. She estimated the total cost to amount to £5.22 - when it should have amounted to £30 in value.

The company responsible for these food packages, Chartwells UK, is a subsidiary of the Compass Group. Paul Walsh, who was chairman of Compass Group until last month, is a Conservative Party donor according to data released by the Electoral Commission.

An investigation by the New York Times also uncovered similar in the government's awarding of equipment contracts in the fight against coronavirus.

This report discovered that firms with no prior experience were awarded £4.5 billion worth of Covid-19 contracts.

popular
The JOE Friday Pub Quiz: Week 227
QUIZ: Name all 50 of these 2000s Champions League players
The Only Way Is Essex star Mick Norcross dies, aged 57
QUIZ: Match The Simpsons quote to the character who said it
Police break up wedding party with 400 guests at school
Deep fake meme lads sing sea shanty that will make you want to abandon your childhood sweetheart and circumnavigate the globe
A definitive ranking of every swear word from worst to best
You may also like
Politics
The Tories are still the most popular political party in the UK, polling data finds
News
Priti Patel planning to dump 300 asylum seekers in 'prison camp' with no mains water
Politics
Gary Neville calls Tory government the 'biggest set of charlatans to ever be elected'
Politics
Police have dropped a rape investigation into Conservative Party MP
Sport
Brexit Party throws supporters into revolt after suggesting support for Marcus Rashford's free school meals campaign
Next Page