The Home Secretary Priti Patel has said in an interview that two families stopping to chat in the street could face fines if there's more than six of them.

When asked on Radio 4's Today programme if two families who numbered more than 6 could stop for a chat on the way out Patel said “It’s mingling, I think it is absolutely mingling but you have to put this into context of coronavirus, and keeping distance and wearing masks…"

“The rule of six is about making sure people are being conscientious and are not putting other people’s health at risk. People can exercise their own judgement, wear masks, social distancing etcetera.”

However, some lawyers have pointed out that mingling, under the current legislation, would not actually be illegal.

On @BBCr4today @pritipatel was asked if a family of 4 stoping and chatting with another family of 4 on the way to the park was "mingling" which was banned.

She suggested it was - people listening will think 'mingling' on the way to the park is banned.

This is *wrong* [thread]

Appearing on Sky News with Kay Burley, the Home Sec also suggested that she would grass on her neighbours if they had more than six people over. She said:

“If I thought I saw something that was inappropriate, I would call the police, in a social setting as well.


“It’s not about dobbing in the neighbours, it’s about taking personal responsibility. If there was a big party taking place, it would be right to call the police. 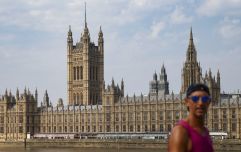 Parliament U-turns on exempting its own bars from 10pm curfew

END_OF_DOCUMENT_TOKEN_TO_BE_REPLACED

“Anyone that is effectively defying the rules, they will be helping to spread coronavirus. That is not a good thing and obviously we all have a role to play.

“We're all taking personal responsibility, we all have to be conscientious to one another.”

“So you would dob in your neighbour?”@pritipatel says she would call the police is she saw a large social gathering. RC#KayBurley pic.twitter.com/HHiofRZyiY

However, hours later, she appeared to backtrack on Talk Radio, telling Julia Hartley-Brewer that she would not call police on neighbours and instead saying people need to "take personal responsibility as to how they conduct themselves."

Home Secretary Priti Patel says she would not call the police if neighbours breached the Rule of Six, saying people need to "take personal responsibility as to how they conduct themselves."