Journalist and Labour activist Paul Mason has hit out at the disrespect shown by Brexiteers like Jacob Rees-Mogg and Boris Johnson to ordinary voters and democratic norms.

Speaking outside of parliament on a day which saw MPs vote in favour of a bill blocking a no deal Brexit, Mason criticised Rees-Mogg after footage showed him lying back on a seat in the House of Commons with his eyes closed. 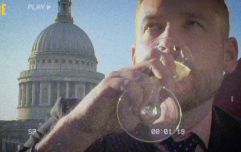 END_OF_DOCUMENT_TOKEN_TO_BE_REPLACED

This, said Mason, was just another example of the entitlement of Rees-Mogg and his ilk.

He also condemned Johnson for his recent proroguing of parliament in a bid to push through a no deal Brexit, and accused him of "aggressively attacking British democracy".