COMMENT: Kanye West, Sajid Javid and kicking away the ladder

Javid himself is the son of an immigrant. We know this because the Tories waste no opportunity to remind us of the fact. He and they love to share the well-worn tale of his Pakistani father moving to Rochdale with a pound in his pocket and taking up a job as a bus driver.

When the Guardian asked Javid how he felt about the fact that his own father would have failed the new immigration rules, the Home Secretary was indifferent to the irony. "It doesn't make me feel sad," he responded. "It makes me very optimistic about our future."

This was followed by the controversy surrounding Shaun Bailey, and what the Conservative candidate for London Mayor had to say about multiculturalism back in 2005. He wrote the following for the Centre for Policy Studies, in a pamphlet called 'No Man's Land':

"I speak to the people who are from Brent and they’ve been having Muslim and Hindi days off. What it does is rob Britain of its community. Without our community, we slip into a crime-riddled cesspool...we've allowed people to come to Britain and bring their culture, their country and any problems they might have, with them."

Theresa May referenced both Javid and Bailey, of Pakistani and Jamaican descent respectively, in her keynote speech at the Conservative Party conference as shining beacons of Tory tolerance and diversity:

"[The freedom] to know that if your dad arrived on a plane from Pakistan, you can become Home Secretary...if your grandparents came to our shores as part of the Windrush generation you could be the next Mayor of London."


The attitudes of both men are disappointing and exhibit a nasty 'I'm okay Jamal' sentiment. There is a distinct sense that they are not willing to allow others the kinds of opportunities that they themselves benefitted from. Essentially, they are kicking away the ladder. 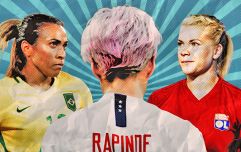 Women's football is on the rise, but it already has its transcendent icons

END_OF_DOCUMENT_TOKEN_TO_BE_REPLACED

That said, what sticks in the craw even more is the exploitation of the situation by those in power. Both Javid and Bailey would resent the notion that they are being used in any way as a personal insult. And many would argue that their behaviour should not be defined and judged in the context of their race.

But that's the thing: you can't have it both ways.

They are being held up as exemplars of an inclusive and meritocratic right-wing. A deliberate narrative is being woven to sell the myth that if Sajid or Shaun can do it, then so you can you. Whereas in reality, they are helping to ensure that they remain the exceptions that prove the rule.

The Tories fucking love it. They can hide behind faces of colour whilst implementing policies that hurt minorities and demonise immigrants. And of course, over the pond, we have Kanye West winning right-wing plaudits for his starring role as 'some of my best friends...' for Donald Trump.

The situation involving Kanye is even more troubling, as he is neither a politician nor fully complicit in the narrative being wrapped around him. His White House ramblings about Superman, male energy and hydrogen planes were neither coherent nor comfortable viewing.

Meme-able mirth aside, Kanye has his own issues. That in no way absolves him of any blame for supporting Trump, nor for his problematic remarks about the 13th amendment, and it is definitely not blaming his behaviour on mental health alone. Many deal with mental health issues without being cunts.

However, there is a far greater sense with Kanye - as opposed to Javid and Bailey - that he is being manipulated and used as a convenient and vulnerable stooge. To highlight that he is a troubled individual is not to say that his mental health is a reason for his actions, but that people are taking advantage of him.

In a sense, Sajid Javid and Shaun Bailey are playing the game, whilst Kanye is more a player in the game. We may not like the game, but it is what it is. Greater resentment and anger should be reserved for the architects, and those is positions of power who want to keep the rules as they are.

Sayeeda Warsi is a good example of someone who was very much part of the machine, but reached a point at which she didn't want to be a well-behaved brown-faced token without a care or voice for the community she came from. At that point, she was kicked away with the ladder and replaced.

Representation has virtue. In itself it is a very surface-level but important sign of progress and diversity. It gives people of that particular minority a very specific example of someone who made it. But it can also be used to give the illusion of positive change, whilst ensuring the opposite.

Perhaps those ascending to the top soon realise that the only way to scale the heights is to promise to conform and kick away at those below you. If you want to get ahead, maybe it is best to always keep licking the arse directly above you - even if that leaves you climbing but sunken.


popular
Nando's is coming back this week
QUIZ: Who said it - Prince Philip or Michael Scott?
QUIZ: Can you guess the Leonardo DiCaprio movie from a single image?
Piers Morgan calls out Dominic Cummings for eyesight claims in press conference
The JOE Friday Pub Quiz: Week 192
The hardest brand logo quiz you'll ever take
OH WHAT A NIGHT: When Manchester United clinched the Treble, by the fans who were there