Donald Trump held a joint press conference with departing prime minister Theresa May today as part of his state visit to the UK, during which he stated that he refused a meeting with Labour leader Jeremy Corbyn.

Speaking at the Foreign Office, just the other side of Downing Street from Number 10, Trump admitted that Corbyn had wanted to meet him but was denied the request.

"He wanted to meet today or tomorrow and I decided that I would not do that," Trump explained.

He then referred to Corbyn as "somewhat of a negative force" before adding "I really don't like critics".

A Labour spokesman confirmed that Corbyn had proposed a meeting with Trump during his presidential visit. They said that the Labour leader "is ready to engage with the president on a range of issues, including the climate emergency, threats to peace and the refugee crisis".

Trump also expressed a similar opinion on Mayor of London Sadiq Khan, who he had called 'a stone cold loser' on Twitter earlier in the week. The US President said of Khan: "He causes a lot of problems, [and is] a negative force, not a positive one. He hurts the people of this country. "

.@SadiqKhan, who by all accounts has done a terrible job as Mayor of London, has been foolishly “nasty” to the visiting President of the United States, by far the most important ally of the United Kingdom. He is a stone cold loser who should focus on crime in London, not me...... 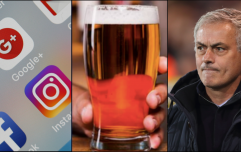 END_OF_DOCUMENT_TOKEN_TO_BE_REPLACED

At the same time, Corbyn himself was taking part in the mass anti-Trump protest that took place in central London, starting at Trafalgar Square.

During his address, Corbyn hailed the NHS and reiterated that it should be for sale to American healthcare companies as part of a trade deal with the US.

He also attacked Donald Trump's treatment of migrants and refugees, stating: "Treat them as fellow human beings and citizens of this planet - who deserve our support, sympathy and understanding."

Visibly impassioned, he continued: "Think on please about a world that's one of peace and disarmament, that is one of recognising the value of all peoples, is a world that defeats racism, defeats misogyny, defeats the religious hatred that is being fuelled by the far right."

Donald Trump added during his press conference that it had been a "true honour" to deal with May, before turning to her and describing it as a "pleasure working with you".

He ended by describing the relationship between the United Kingdom and the United States of America as the "greatest alliance the world has ever known."

Thousands of protesters are on the streets of London in opposition to the state visit of President Donald Trump #TrumpProtest pic.twitter.com/dc1MzuRgJz

You may also like
Entertainment
THE JOE FRIDAY PUB QUIZ: WEEK 173
Sport
The JOE Friday Pub Quiz: Week 171
Politics
Is the United Kingdom now a right-wing country?
Politics
How the Tories took over a northern Labour safe seat
News
Meet the election candidate who changed his name to Brexit
Next Page