"Covid-19 was the rainy day we had been saving for"

David Cameron has said the UK government's austerity programme helped prepare the country for the coronavirus pandemic and the subsequent lockdown measures.

Writing the updated introduction to the paperback edition of his memoirs, published this week, the former prime minister said that "Covid-19 was the rainy day we had been saving for."

"Our actions meant that the next but one administration was able to offer an unprecedented package of measures to prop up the economy," Cameron continued.

"I sat watching Chancellor Rishi Sunak ’s press conferences thinking how vital it was that we had taken those difficult decisions when we did."

In the new introduction, David Cameron also says that he made preparations to deal with a potential pandemic, and says claims that not enough was done are only "partly accurate".


"I knew a pandemic would come one day, possibly sooner rather than later. That’s why I made it a ‘tier one risk’ at the National Security Council." 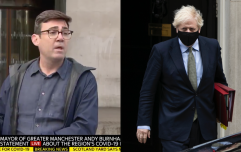 END_OF_DOCUMENT_TOKEN_TO_BE_REPLACED

"We also established a sub-committee to deal with Threats, Hazards, Resilience and Contingencies."

"The accusation – which is partly accurate – is that subsequently not enough was done to prepare specifically for what followed. But this is what strategists mean when they talk about ‘known unknowns. We knew a pandemic was coming, we just didn’t know what type."

"It is now clear, in a way it wasn’t then, that the extensive preparations made for pandemic flu were not wholly transferable to handling a pandemic of a very different kind."

David Cameron's memoirs, For The Record, were originally published in hardback in September 2019. He reportedly signed an £800,000 contract with Harper Collins UK for the book. The memoirs covers Cameron's time as head of state, including the Brexit referendum in 2016 and his subsequent resignation following the result.

You may also like
News
Police will enter homes to break up Christmas dinners if families break rules
News
Turns out coronavirus antibodies last 'just a few months', so that's crap
News
Four students fined £10,000 each for house party during Tier 2 lockdown
Fitness & Health
Armed police close gym near Liverpool after owner refused to shut doors
News
Students given coronavirus test kits that had already been used
Next Page