One of the stranger elements to the country's internal ramblings about the European Union has been the rise of Wetherspoons founder and chairman Tim Martin as a Brexit figurehead, even if he appears to know surprisingly little about one key aspect of the debate.

For many, the EU's impact on British laws was a key issue in the referendum and Martin is evidently trying to tap into that opinion.

"The main issue for me was you never knew where EU law began and British law ended," the 63-year-old told The Guardian journalist Owen Jones in a recent interview in a Southend Spoons.

However, when pressed on exactly which laws he dislikes, Martin stumbles, stating: "It's too dissective to boil it down to that. 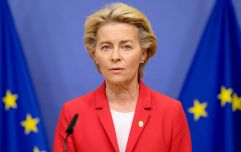 END_OF_DOCUMENT_TOKEN_TO_BE_REPLACED

Which is an odd opinion to hear from a man currently touring his chain of pubs making speeches advocating a no-deal Brexit.

Later in the clip, Martin gives Jones an example of something he dislikes about the EU, namely the "huge pressure" Britain faced to join the European Exchange Rate Mechanism, which it declined to do between 1979 and 1990. It withdrew just two years later following a crash known as Black Wednesday.

On the Euro currency, Martin claimed: "70 per cent of the people thought it was inevitable that the UK would join. I don't like the Eurozone, I think it's very dangerous."

Chaos descends from there as the personalities clash, leading to Martin denouncing Jones as "rude and aggressive."

"It's a childish interview," he complains. "You've been on the Stella!"

You may also like
Football
Brexit turned my Football Manager 2021 journey into absolute hell
News
Joe Biden says Northern Ireland border must remain open post-Brexit
News
Two-thirds of Brits don't think EU nationals should have freedom of movement
News
Brexit: Lorries will need permit to enter Kent from January
News
Ed Miliband offered out Boris Johnson in front of his mates - and the PM did nothing
Next Page