Mr Gove said he was unhappy with Mr Johnson being PM

Boris Johnson has sacked Levelling Up Secretary Michael Gove, it has been confirmed. 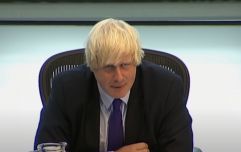 END_OF_DOCUMENT_TOKEN_TO_BE_REPLACED

It comes just hours after Mr Gove said he was unhappy with the prime minister staying in his position, Sky News understands.

Commenting on the news, a Number 10 source said: "You can't have a snake who is not with you on any of the big arguments who then gleefully tells the press the leader has to go."

Mr Johnson had vowed to keep going on Wednesday, despite dozens of Tory MPs departing in the last 24 hours. Former health secretary Sajid Javid and chancellor Rishi Sunak were amongst those who quit.

Mr Gove had already paid a visit to No 10 to tell Mr Johnson to go, The Daily Mail reported earlier.

When asked if Mr Gove had visited him, the PM said he would not be giving a "running commentary".

This is a breaking news story which will be updated.

popular
The JOE Friday Pub Quiz: Week 308
Multiple fatalities after planes collide mid-air over airport
Former Playboy Bunnies detail what it was like having unprotected orgies with Hugh Hefner
Carlo Ancelotti confirms Casemiro will join Man United
Incredible case of the only known individual whose parents were two different species
Pilots fly over destination airport at 37,000 feet - because they were both sleeping
Gerard Butler breaks silence after death of 'brother in arms' Darius Danesh
You may also like
Politics
Boris Johnson calls in lawyers as threat of Commons suspension looms
Politics
Johnson once described his time as foreign secretary as like being 'imprisoned in a steel condom'
Life
Boris and Carrie put south London home on the market for £1,600,000
Politics
Can you guess the real names of these UK politicians?
Sport
Calls for a Bank Holiday following Lionesses EUROS win
Next Page