The televised debates are set for Wednesday evening. 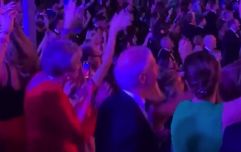 END_OF_DOCUMENT_TOKEN_TO_BE_REPLACED

It is still not confirmed who will represent Labour, as leader Jeremy Corbyn said he would only participate is Theresa May did. Liberal Democrat leader Tim Farron, Plaid Cymru leader Leanne Wood, Green co-leader Caroline Lucas, Scottish National party’s deputy leader, Angus Robertson and Ukip’s Paul Nuttall are all confirmed to take part.

The debates take place this Wednesday, May 31st, in Cambridge between 7.30pm and 9pm, and will be moderated by Mishal Husain. Each panellist will give opening remarks, and then answer questions from the audience. The order of opening statements were determined by drawing lots, along with which podium each participant will stand at.

popular
Ex-teacher who got pregnant by former student plans to film birth so it can be taught in schools
Landlord faces £40k fine after tenant puts swimming pool on roof of flats
Lisa Kudrow hits back at fans complaining about lack of diversity in Friends
James May 'hospitalised after crashing into wall at 75mph filming new show'
The JOE Friday Pub Quiz: Week 307
Robin Williams' wife shares reason why he killed himself
Furious Reading and Leeds ticketholders demand refunds as band replaces Rage Against The Machine
You may also like
News
Theresa May tells Priti Patel she cannot support Rwanda deportation scheme
News
New record as more than 430 migrants cross Channel in one day
News
Theresa May urges Priti Patel to reconsider policing bill: 'our freedoms depend on it'
News
All living former prime ministers have condemned Boris Johnson's latest Brexit move
News
Gavin Williamson nominated for MP of the year award
Next Page