A mute button will be used in the next presidential debate

A wise decision, as anyone who watched the first debate will be aware.

A mute button will be used in the next US presidential debate, it has been announced.

Each candidate will be given two minutes to answer the moderator's questions, during which time the other man's microphone will be turned off.

A statement released by the US Commission of Presidential Debates admitted that it was a tough decision to make, but that it was one that was necessary.

"We realise, after discussions with both campaigns, that neither campaign may be totally satisfied with the measures announced today," the statement read.

"We are comfortable that these actions strike the right balance and that they are in the interest of the American people, for whom these debates are held.

"The only candidate whose microphone will be open during these two-minute periods is the candidate who has the floor under the rules." 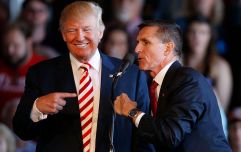 END_OF_DOCUMENT_TOKEN_TO_BE_REPLACED

As you may imagine, Trump's campaign has reacted angrily to this news, claiming that it attempts "to provide advantage to their favoured candidate".

The first debate took place at the beginning of this month and interruptions were a regular feature, so much so that Joe Biden snapped at one point and said to Trump "Will you shut up man? This is so unpresidential."

Imagine someone told you 10 years ago that a mute button would be necessary for a presidential debate?

The final debate will take place on Thursday 22 October.