The disease is not easily transmissible

A woman in the UK has been diagnosed with Crimean-Congo haemorrhagic fever (CCFH), an Ebola-like disease which is usually passed on through livestock or ticks.

The unnamed woman is believed to have contracted the virus in a recent trip to Central Asia and after diagnosis from Cambridge University Hospitals NHS Foundation Trust, is being treated at the Royal Free Hospital in London.

The disease is usually transmitted through ticks/Via UnSplash
Advertisement

According to the government website, Dr Sir Michael Jacobs, a consultant in infectious diseases at the Royal Free London, said: 'The Royal Free Hospital is a specialist centre for treating patients with viral infections such as CCHF.

END_OF_DOCUMENT_TOKEN_TO_BE_REPLACED

"Our high level isolation unit is run by an expert team of doctors, nurses, therapists and laboratory staff and is designed to ensure we can safely treat patients with these kind of infections."

Often compared to Ebola, CCFH has similar initial symptoms and a mortality rate of 40 per cent.

Dr Susan Hopkins, the chief medical adviser at UKHSA, said the virus "does not spread easily between people and the overall risk to the public is very low." UKHSA are currently tracking down close contacts.

"UKHSA and the NHS have well-established and robust infection control procedures for dealing with cases of imported infectious disease and these will be strictly followed," she added. 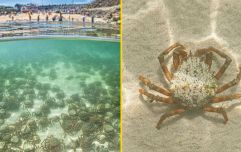 END_OF_DOCUMENT_TOKEN_TO_BE_REPLACED

There are two previous cases of CCFH on record, both solitary in 2012 and again in 2014.

The disease was first recorded in Crimea in 1994 but upon closer analysis, CCFH was thought responsible for an outbreak in the Congo in 1956. Both locations are featured in the disease's lengthy name.

"It can also be contracted through contact with viraemic animal tissues (animal tissue where the virus has entered the bloodstream) during and immediately post-slaughter of animals.

"CCHF outbreaks constitute a threat to public health services as the virus can lead to epidemics, has a high case fatality ratio (10-40%), potentially results in hospital and health facility outbreaks, and is difficult to prevent and treat.

"CCHF is endemic in all of Africa, the Balkans, the Middle East and in Asia."