WATCH: Protestor tries to diffuse real-life situation with a Pepsi, and it doesn't end well

This truly has been a historic week for carbonated soda, hasn't it?

First, there was the advert which sent Twitter into a maelstrom of righteous indignation at the thoughts of a model effectively bringing about world peace with the assistance of a can of brown lemonade.

Then Pepsi did the smart thing and pulled the ad completely, and apologised for missing the mark with their well-intentioned but uniquely tone-deaf attempt at unity via soda.

They might have hoped that might be the end of it, but it isn't. Not by a long shot.

While we can expect Kendall Jenner reacting-to-things to be the meme du jour for 2017 (sorry, Salt Bae), people are now referencing the advert in real life.


Earlier in the week, a protestor by the name of Carlos Enrique was in a City Council meeting in Portland, Oregon, and he felt that it was kind of getting away from him. 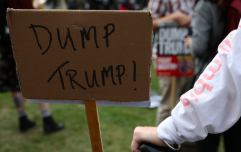 As Trump visited Britain, once again the heart of our democracy was the focal point for anger

END_OF_DOCUMENT_TOKEN_TO_BE_REPLACED

“The language of the resistance has not been properly translated to you. So this is for you,” before standing up and reaching into his pocket, which with the use of objective distance, is just about the most stupid thing you could say and then do in an American government building.

But it was all cool, he just gave the Mayor a can of Pepsi.

Not that the Mayor was impressed, we might add. And neither were his security detail, who walked Mr Enrique off-camera pretty quickly.


popular
QUIZ: Identify the brand from just its slogan
The JOE Friday Pub Quiz: Week 197
Here's how to see who's been taking screenshots of your Instagram Stories
A definitive ranking of every swear word from worst to best
The JOE Friday Pub Quiz: Week 196
QUIZ: Are these bizarre British laws real or fake?
The hardest brand logo quiz you'll ever take

You may also like
News
Climate change protesters Extinction Rebellion smash Shell HQ and blockade London's roads
Life
A step-by-step guide to making a protest placard that will go viral online
News
Protesters flood streets of London as over 500,000 call for People's Vote on Brexit
News
Violent clashes in capital as hundreds take to London streets in far-right march
News
Huge anti-Trump demo attracts tens of thousands in London during US president's visit
Next Page