Abandoned stores and restaurants can be particularly creepy places. But this is something else. 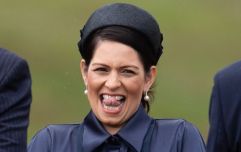 END_OF_DOCUMENT_TOKEN_TO_BE_REPLACED

Police in the US have found a secret drug tunnel that leads all the way to Mexico, in an abandoned KFC store in Arizona.

The tunnel leads from the basement of the restaurant in San Luis to a trap door in the bedroom of a home in San Luis Rio Colorado.

The tunnel was discovered when suspect Ivan Lopez was pulled over by police, and sniffer dogs found 118kg of methamphetamine, 6kg of cocaine, 3kg of fentanyl, and 19kg of heroin in his vehicle. The drugs had a street value of over $1 million.

It is thought drugs were smuggled from Mexico through the tunnel, pulled along on a rope.

Two years ago, a similar 2,600ft tunnel was discovered in San Diego.

popular
Why United vs Villa and Chelsea vs City are happening at the same time
'Loch Ness Monster' caught on drone footage by wild camper
Foreign workers to be let into UK to help solve petrol crisis
The JOE Friday Pub Quiz: Week 262
Man blocks pavement with fence to stop chippy customers staring into living room
Billie Eilish says she lost 100,000 followers 'because of the boobs'
Man accused of having sex with horse escapes from jail
You may also like
Life
Fake Just Eat rider arrested after police find bag full of drugs instead of food
Crime
Stockton man arrested as £160m of cocaine seized on luxury yacht
Entertainment
Michael K Williams: The Wire and Boardwalk Empire star found dead aged 54
Entertainment
Michael Gove's Aberdeen raving video has been hilariously edited into Trainspotting scene
Politics
William Hague calls for drugs to be decriminalised in the UK
Next Page