The egg avatar, familiar to and beloved by millions upon millions of Twitter users around the world, is no more.

Well, ‘beloved’ might be a bit of a stretch as it only appeared on accounts that were, for example, newly established, barely used or deliberately left without a profile picture so the person behind it could issue faceless abuse via a platform where spite is, unfortunately, a way of life.

Seven years after it was first introduced to Twitter, the egg is being replaced by something equally as mundane as its predecessor.

In a lengthy post detailing the reasons behind the change, Twitter outlined a few key reasons why they’ve disposed of the egg. 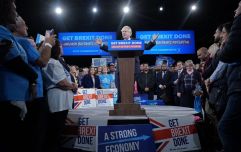 END_OF_DOCUMENT_TOKEN_TO_BE_REPLACED

While the first two reasons seem fair enough, it is optimistic in the extreme to suggest that the new avatar is going to stop the negative behaviour they talk about from Twitter users without an identifiable profile photo.

Explaining, fairly exhaustively we should add, how they arrived on the final design, meanwhile, Twitter said that they wanted it to have the following traits:

Can you see all of those in the new avatar? Have Twitter cracked it with the egg replacement, or have they just gone with any old yolk?

Twitter welcome any feedback on the design, which you can provide here.


popular
The FootballJOE Quiz: Week 2
The definitive ranking all 151 original Pokémon from worst to best
A definitive ranking of every swear word from worst to best
These 10 flags are objectively the best in the world
This is the hardest Pokémon quiz you'll ever take
Freddy from School of Rock has grown up to be an actual rock star
This is how much time most men need after orgasm before they're ready for another round