Turkish Prime Minister Binali Yildirim has responded to reports of gunfire in the country's capital by admitting that a military coup has been attempt.

The PM has described the ongoing events as an "illegal attempt to seize power", according to the Daily Telegraph, while reports from the country suggest he has specifically held "part of the military" responsible.

He has reportedly stated on national television that the coup will not be allowed to succeed.


According to a Reuters witness, military jets and helicopters have been heard flying over Turkey's capital, Ankara, where gunfire has also been heard, while helicopters were also reported by eye-witnesses in Istanbul. 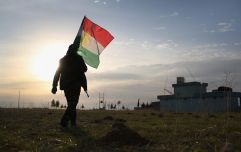 Meet the woman helping the Kurds rebuild their shattered society

END_OF_DOCUMENT_TOKEN_TO_BE_REPLACED

Reports have since emerged that Istanbul's Ataturk Airport has been seized by the country's military.

This is a developing story and we will attempt to provide updates as and when they arrive.

At this stage, much of the information which has surfaced is unconfirmed, but journalists and eyewitnesses with access to events in Ankara and Istanbul are sharing information where possible.

What we know so far:
- Military attempted a coup
- Govt claims it's failed
- Police to counter uprising
- Increased mil activity on streets


popular
Buying your first house is about to get even more difficult
Manchester United agree terms with Inter Milan for Alexis Sanchez transfer
It was Pierre-Emerick Aubameyang's final but Emiliano Martinez's moment
A must-see Jurgen Klopp documentary on Channel 4 this evening
QUIZ: Can you identify the correct spelling of these brand names?
A definitive ranking of every swear word from worst to best
QUIZ: How much are these meals under the Eat Out To Help Out scheme?

You may also like
Sport
Loris Karius makes two stunning saves in Turkish Super Lig game
Life
This Christmas will be the most expensive in a decade, survey finds
News
Watch Putin give Saudi crown prince a big old high five at the G20
Sport
Galatasaray official blames Donald Trump for club's lack of signings
Sport
COMMENT: Mesut Ozil deserves credit for saying what no one wants to hear
Next Page