The strikes will take place on January 26 as well as February 15 and 17, as disputes over pay and night tubes drag on.

The RMT union confirmed the news on Monday, with drivers from the Aslef union also promising to join the industrial action.

Overnight tube services were due to begin operating during weekends back in September, but a series of strikes delayed the implementation of the new system. 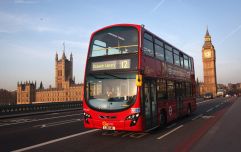 END_OF_DOCUMENT_TOKEN_TO_BE_REPLACED

London Underground staff will once more undertake industrial action over the a failure to agree how the service will work, as well as disputes over pay and work rosters.

RMT general secretary Mick Cash said the union supports the idea of a "properly worked out night Tube service" but added that an "abject failure to work through the detail has led to a comprehensive breakdown in the negotiations".

London Mayor Boris Johnson said: "If a strike goes ahead, it will hit many London Underground workers who do not necessarily support the action, and it will cost the strikers in lost pay."

But Sadiq Khan, Labour's candidate for London's upcoming mayoral election, placed the blame firmly at Johnson's door, saying: "It proves once and for all that the Tory strategy of refusing to negotiate or even meet with the unions makes strikes more likely not less."

popular
Landlord faces £40k fine after tenant puts swimming pool on roof of flats
Graeme Souness under fire for calling football a ‘man’s game' while sat with Karen Carney
Incredible case of the only known individual whose parents were two different species
Comedian cancelled after ‘getting his penis out on stage’ during Edinburgh Fringe Festival
Man with laughing condition like The Joker accused Joaquin Phoenix of stealing his persona
JK Rowling told 'you are next' after stabbing of acclaimed author Salman Rushdie
Man 19 years older than his wife shocked to learn he had met her when she was a baby
You may also like
Sport
Inside the UK's biggest sports bar - set to open ahead of 2022 World Cup
News
Watch: Graduation ceremony erupts after student dances onto stage and jumps into the splits
News
Man wakes up after night on sleeper service to discover his train never left the platform
Life
Woman lay dead in flat for over two years but landlord 'cut off gas and kept taking rent', inquest heard
News
Top 10 areas in England where you’re most likely to catch an STI ranked
Next Page