When Nintendo get it right, they really knock it out of the park...

During their presentation speech at E3 this week, Nintendo unveiled a brand new trailer for the next Legend of Zelda game. 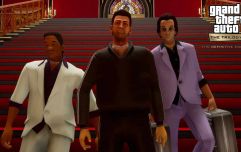 END_OF_DOCUMENT_TOKEN_TO_BE_REPLACED

Now called "The Legend of Zelda: Breath of the Wind", the new game looks nothing short of stunning, boasting a cell-shaded graphical style similar to previous Legend of Zelda games The Wind Waker and Skyward Sword.

In a further "wow" moment, it appears Breath of the Wind could be the The Legend of Zelda series' first foray into open world gaming, as this version of Link (who might be a girl this time), cooks, crafts, hunts and solves puzzles in a number of varying locations. There seems to be a real interplay with the WiiU controller as Link casts magic spells and does combat with a number of creatures also.

For gamers who remember taking Epona across Hyrule Field in Ocarina of Time, the thought of an open world Legend of Zelda game has us in goosebumps.

The Legend of Zelda: Breath of the Wind will be available on both the Wii U and the upcoming NX console that is expected to be with us in March 2017. We can't wait.

popular
Scotland international rugby star Siobhan Cattigan dies aged 26
Elon Musk shares 'evidence' we are actually living in a simulation
A definitive ranking of every swear word from worst to best
Woman wins millions after suing mum's GP for allowing her to be born
Lovely Bones author apologises to exonerated man who spent 16 years in prison for her rape
Here's how to see who's been taking screenshots of your Instagram Stories
Nasa warns 'concerning' asteroid will break into Earth's orbit in a week
You may also like
Entertainment
New Netflix series with 100% on Rotten Tomatoes already lands second season
Entertainment
Wario is officially the best character to use in Mario Kart
Entertainment
Battlefield 2042 Review: the most creative and chaotic yet
Entertainment
The worst GTA glitches that prove the remaster should never have been released
Entertainment
Xbox boss all but confirms next Elder Scrolls will be Xbox exclusive
Next Page