Footage of the incident has been widely shared on social media.

Hundreds of people descended on Temple Bar on Thursday evening to protest outside the The Temple Bar Pub following an alleged assault which took place outside the premises on Monday night. 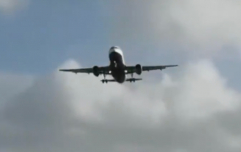 END_OF_DOCUMENT_TOKEN_TO_BE_REPLACED

Temple Bar webcam footage of the incident shows two skateboarders, who have since been revealed to be a 13-year-old and a 16-year-old, involved in a clash with security guards outside the pub.

In the video, one of the youths appears to be kicked by one of the men while being held on the ground by another.

At the end of the footage, one of the skateboarders can be seen being dragged into the pub from the street by a member of staff.

Protestors gathered outside the pub on Thursday to call on the pub to "come out and say sorry" for the incident.

END_OF_DOCUMENT_TOKEN_TO_BE_REPLACED

The protest was peaceful and while Gardaí were at the scene, there were no incidents reported and the crowd dispersed without incident following the protest.

An Garda Síochána revealed an investigation into the incident is ongoing, saying it is "investigating allegations of an assault that is believed to have occurred in the Dublin 2 area on Monday, 26 July 2021".

JOE has contacted The Temple Bar Pub for comment on the matter.

popular
Incredible case of the only known individual whose parents were two different species
TikTokers are utterly convinced there is a secret zombie apocalypse going on in China right now
Darius Danesh opened up about his health struggles before his tragic death aged 41
Pop Idol star Darius Danesh found dead aged 41
Jamie Foxx and Snoop Dogg's vampire movie surges to the top of Netflix charts
People are sharing 'evidence' that history's biggest event was staged by humans
Brits who snore could get £156 in DWP benefits every week
You may also like
Social Media
Nigel Farage tricked into saying "Up the Ra" in video birthday greeting
Life
Popular restaurant accused of paying employee with bucket of coins
Life
Ryanair launches 24-hour sale on 500,000 seats over 650 routes with prices starting from £12.99
Social Media
'Genius' Irish woman pretends to work at Primark so she can shop there
Coronavirus
Johnson &amp; Johnson single dose Covid-19 vaccine shows 66% efficacy
Next Page