In the days and weeks following the Manchester Arena attack, Don't Look Back in Anger became a uniting force between Mancunians.

The Oasis classic became emblematic of the spirit of Manchester, of refusing to bow to terror, instead standing by the side of your neighbour in peace. Notably, the song was sung at the conclusion of a minute's silence, and played by a string quartet as Ariana Grande, now a hero of Manchester, was made an honorary citizen of the city.

Last night, the Manchester Arena opened for the first time since the terror attack, with a special benefit concert: We Are Manchester.

The sell-out show with 14,000 people reportedly in attendance saw performances from the likes of The Courteeners, Blossoms, Rick Astley, Pixie Lott, Bugzy Malone, as well as readings from Tony Walsh and Mayor of Manchester Andy Burnham.

Oh yes. This is what the spirit of Manchester looks like. #WeAreManchester ❤️🐝 pic.twitter.com/O1KavXaNjP


But it was a headline performance from Noel Gallagher that would arguably be the highlight of the night (though by all accounts The Courteeners were a tough act to follow). 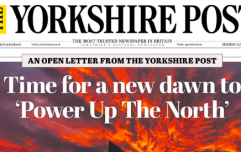 END_OF_DOCUMENT_TOKEN_TO_BE_REPLACED

With a setlist combining solo material and Oasis classics, Gallagher was joined in strong voice by the thousands in attendance. The final song of the night was 'Don't Look Back in Anger', and ahead of the song Gallagher told the crowd: "So for any of you that doubt it - and some people doubt that Manchester is the greatest city in England…"

"I was sat watching Sky News and watching the minute’s silence. And one girl that was there and sang this song. And I don’t know if you’re here tonight, but I love you."

And then, this happened.

All proceeds from the We Are Manchester concert will go towards a permanent memorial to the victims of the attack.

You may also like
Politics
Andy Burnham: How will COVID-19 change our society?
Health
Last orders for Manchester's night life before lockdown
Entertainment
Peaky Blinders bar in Manchester hit with legal warning from the show's producers
Entertainment
You can audition to dance with the Spice Girls on their upcoming tour
News
Manchester fire brigade called to restaurant caught in blaze
Next Page