An investigation into a fatal car crash is examining whether a Snapchat feature could have played a part in the tragic accident.

A driver and two passengers were killed in Philadelphia in the United States when their speeding car collided with a tractor trailer and burst into flames. 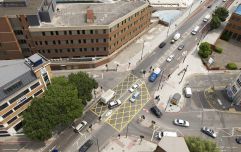 END_OF_DOCUMENT_TOKEN_TO_BE_REPLACED

And investigators have admitted they are looking into whether Snapchat played a part in the crash.

Snapchat allows you to check your speed through the app, and questions have been asked as to whether those in the car were using the speedometer feature while traveling above the legal limit.

A relative of one of the victims told WPVI that one of the last snaps they sent showed the trio travelling at 73mph, while other snaps had allegedly been sent throughout the car journey.

"Then allegedly showed them in a car, holding up how fast they were going," said Jimmy Abgarian, whose niece Gia died following the crash.

"I believe the mileage was about 73, they said, and could've gotten more."