Tragedy has unfolded in a mountainous area not far from Colombia's international airport at Medellin.

A charter plane carrying more than 80 people has crashed en route to Medellin, according to authorities in Colombia.

END_OF_DOCUMENT_TOKEN_TO_BE_REPLACED

Medellin international airport has confirmed that the flight reported an emergency - due to electrical failures - and was making its way to its final destination when the crash occurred.

"At the moment we know that the disaster happened in Cerro Gordo the municipality of La Unión and that there were 72 passengers and nine crew aboard, including the football team Chapocoense Real. There are reported to be six survivors."

El Tiempo, a Colombian news outlet, has reported that there were 22 members of the Chapecoense team on the flight. A 23rd member of the squad was said to have missed the flight after sustaining an injury.

The team were involved in a Brazilian Serie A clash with Palmeiras on Sunday, losing 1-0 in Brasileiro. It was enough for Palmeiras to claim the title.

Chapecoense were due to play Atlético Nacional in the South American in Wednesday's quarter final of the Copa Sudamerica, in Medellin. 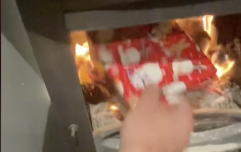 END_OF_DOCUMENT_TOKEN_TO_BE_REPLACED

Federico Gutierrez, Mayor of Medellin, told Blu Radio, as he travelled to the crash site, that there was a chance of finding survivors. "It’s a tragedy of huge proportions," he declared.

The plane involved in the crash was reportedly chartered to carry the Argentinian national football team earlier this month.

This was the plane that crashed in Colombia, used to transport Argentina national team earlier this month (photo: @BriEmmanuel_U ) pic.twitter.com/h5LZnZI9fS

There is a possibility that more than more than six survived the flight. Mi Oriente report a fire chief from La Unión stating that 10 people were being treated at the scene.