He was declared free of the virus in March last year

Adam Castillejo, a 40-year-old man from London, is believed to be the second person in the world who has been cured of HIV.

END_OF_DOCUMENT_TOKEN_TO_BE_REPLACED

Doctors said he has remained free of the virus for 30 months after he stopped anti-retroviral therapy.

The 40-year-old was not cured by the HIV drugs alone, but by a stem-cell treatment he received when he had cancer, the Lancet journal reported.

The donors of those particular stem cells have an uncommon gene that gives them protection against HIV.

Adam Castillejo, known in the medical world as 'The London Patient', still has no detectable active HIV viral load in his tissue, blood or semen.

Tests showed that 99% of Castillejo's immune cells have been replaced by donor ones.

Scientists say that stem cell transplants appear to stop the virus's ability to replicate itself within the human body by replacing the patient’s own immune cells with donor ones that can resist the infection.

Ravindra Kumar Gupta, Professor of Clinical Microbiology at Cambridge University, told BBC News: "This represents HIV cure with almost certainty. We have now had two and a half years with anti-retroviral-free remission.

"Our findings show that the success of stem-cell transplantation as a cure for HIV, first reported nine years ago in the Berlin patient, can be replicated."

Castillejo recently decided to publicly reveal his identity to share his extraordinary story.

On twitter, he said he was truly fortunate to work in partnership with Dr Ravindra Kumar Gupta.

#goodbye2020Hello2021
This year I got the honor and privilege to celebrate Prof @GuptaR_lab achievements of the #time100 most influential people in 2020 @TIME I'm truly fortunate to work in partnership with him in #HIV Research #hivcure 🎗@TheLancetHIVhttps://t.co/yl35dYK3yY 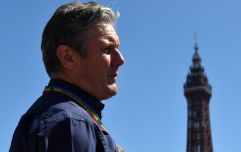 Starmer says Butler was right to call PM a liar, but was rightly removed from Parliament

END_OF_DOCUMENT_TOKEN_TO_BE_REPLACED

Speaking to The New York times, Castillejo said: "This is a unique position to be in, a unique and very humbling position.

"I want to be an ambassador of hope. I don’t want people to think, ‘Oh, you’ve been chosen.’

"No, it just happened. I was in the right place, probably at the right time, when it happened."