He was not in the country for the FA Cup final

Chelsea owner Roman Abramovich missed his club's FA Cup victory last weekend due to complications with his visa which prevented him from entering the United Kingdom. 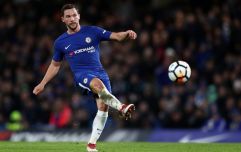 END_OF_DOCUMENT_TOKEN_TO_BE_REPLACED

The Russian billionaire has found a short-term solution to the problem by applying for Israeli citizenship, which will allow him into the UK for a 'short stay' of six months or less.

He qualifies for Israeli citizenship through his Jewish heritage.

The root cause of his UK visa complications comes from his refusal to disclose the sources of his income. In Israel, meanwhile, he will be exempt from paying taxes and declaring income for ten years, under a controversial law that police reportedly say was pushed by Benjamin Netanyahu to benefit his billionaire friends in exchange for gifts.

Chelsea owner & Russian billionaire, Roman Abramovich has been granted Israeli citizenship. It comes after he was unable to extend his British visa, amid a diplomatic spat between London and Moscow. Israel passport holders are allowed to enter Britain, visa-free, for short stays

Chelsea owner Roman Abramovich has landed in Israel & has officially immigrated to Israel 🇮🇱 He is now the richest person in Israel!