Prince Harry just had a HIV test live on Facebook

Fair play to him: Prince Harry has just got a HIV test done live on Facebook to show the world how quick and easy the process can be.

The video, which currently has over 260,000 views, was streamed live from Guys and St Thomas' Hospital in London and shared on the official Royal Family Facebook page.

Harry wanted to highlight the importance of getting checked for HIV by helping to destigmatise the procedure.

“Gay, straight, black, white – even ginger, why wouldn’t you have a test?” says Prince Harry on #HIV testing pic.twitter.com/wgbTIblQvN

"It's amazing how quick it is," he is heard saying in conversation with the medic.

During the procedure, which is literally a finger prick, Harry asked what are the biggest fears of people coming in for tests.

"The fear is not knowing," the doctor replied. "It's out job to let people know about their health and keep them healthy. It's important for people to know that if they are at risk to just have a test."


The Prince had his results almost instantaneously, and was confirmed HIV negative. He then asked "on the behalf of other people watching this" what would happen if he was declared positive. 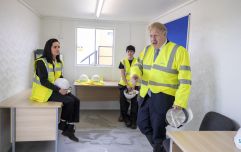 END_OF_DOCUMENT_TOKEN_TO_BE_REPLACED

"You would have to take one pill everyday for the rest of your life, but could continue to work, have a partner, and have a good healthy sex life," the doctor said.

Then the prince joked: "So whether you're a man, woman, gay, straight, black or white, even ginger, why wouldn't you come and have a test?"

Harry will be attending the 21st International AIDS conference held in South Africa next week to carry on with his work in promoting awareness around HIV and AIDS.

He's following in his mother Diana's footprints, who worked tirelessly for the cause and did a lot to de stigmatise the perception of HIV and AIDS in the '80s and '90s. Princess Diana was one of the very first high profile people to be photographed touching those afflicted with AIDS, which at the time was seen as a taboo.

If you would like to be tested, head here for more information.

popular
Buying your first house is about to get even more difficult
Manchester United agree terms with Inter Milan for Alexis Sanchez transfer
A must-see Jurgen Klopp documentary on Channel 4 this evening
It was Pierre-Emerick Aubameyang's final but Emiliano Martinez's moment
The Rock has bought the XFL for $15 million
QUIZ: How much are these meals under the Eat Out To Help Out scheme?
A definitive ranking of every swear word from worst to best

You may also like
Fitness & Health
Jay Moir: The inspiring fitness instructor with cerebral palsy
Fitness & Health
Does muscle soreness mean you've had a good workout?
Fitness & Health
Female bodybuilder hits back at internet trolls
News
New swine flu with "pandemic potential" found by researchers in China
Fitness & Health
What they don't tell you about bodybuilding photoshoots
Next Page