Following images and video footage going viral on social media, British Transport Police (BTP) are set to review the arrest of a 16-year-old boy following an incident at London's King Cross station. The teenager was charged with assaulting a girl at Peterborough station before boarding the train and being in possession of drugs. 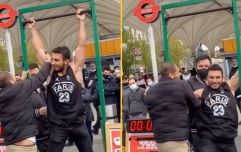 END_OF_DOCUMENT_TOKEN_TO_BE_REPLACED

As you can see in the clips below, the boy is screaming in pain as multiple officers pin him down, going on to pepper spray him and twist his arm and wrist behind his back as he is handcuffed. @lifeofjam_ is pushed as he and another man, who falls to the ground, try to raise concern. One of the officers continually orders him to "get back", before pushing the onlooker again.

Vile. Didn’t even announce why your officers were arresting him, and then nearly snapping his forearm???? @metpoliceuk pic.twitter.com/AWj9OelJY5

According to @lifeofjam_, nobody on the platform was made aware of the reason why the young boy was being arrested and were simply trying to ensure no further harm was caused, as they felt the police were using excessive force.

Speaking to The Evening Standard, the man said: “I was worried because he was starting to sound in agony, they removed the cuffs because he was complaining of pain and he started crying which they ignored and continued.

“I was a little worried because of how his arm was bending and they were asking him to roll over at one point while one of the officers had their bodyweight all on his legs.

“I felt their actions were over the top. I don’t believe that they helped the situation with brute force. At one point the officer had his knee over the man's crotch.

“He brought out the pepper spray after he pushed a man down who hadn’t moved. I did at one point feel like he was going to pepper spray the vicinity.” 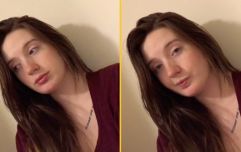 END_OF_DOCUMENT_TOKEN_TO_BE_REPLACED

While the manner of the arrest itself is being investigated, a spokesperson for BTP said that the 16-year-old appeared at Westminster Magistrates’ Court yesterday on May 4th and was charged with assault, possession of class B controlled drug and breach of bail.

The incident itself occurred on the same day in which an officer was seen using brute force to punch the legs of a Manchester United fan at the Glazer protests at Old Trafford.

popular
Uefa to investigate Manuel Neuer over rainbow armband
The JOE Friday Pub Quiz: Week 248
England and Scotland fans flimed fighting after "we hate Scotland" chants
QUIZ: Can you name these countries on a map?
Uefa stop review of Manuel Neuer's rainbow captain armband
Didi Hamann says Ronaldo looks "a fool" after needless showboating against Germany
A definitive ranking of every swear word from worst to best
You may also like
Life
Beloved TikTok star and Capuchin Monkey George has passed away
Life
Viral TikTok shows woman glue 7,700 pennies to her bathroom, missing out on potential fortune
Entertainment
Woman goes viral after saying she won’t leave the house as she stands in town centre
Entertainment
Adam Sandler reunites with hostess who turned him away
Social Media
Police confront woman in theme park because her shorts are 'too short'
Next Page