Creepy clowns have been popping up everywhere in America recently, and as Halloween approaches it unfortunately looks like the craze has arrived in the UK.

Last week we told you about a viral video taken by two guys in Ohio. They were out running in the woods when they spotted a clown figure walking across the bridge. The mysterious fancy-dresser reportedly turned around and started chasing them with a knife.

As clown hysteria continued to sweep the US, students at Penn State University decided to take matters into their own hands, with hundreds mobbing together to try and hunt them down on the campus.

Macron privately called Boris Johnson 'a clown', according to reports

END_OF_DOCUMENT_TOKEN_TO_BE_REPLACED

And now clown mania appears to have crossed the pond, as police forces in Essex, Durham, Newcastle and Manchester issue warnings to anyone planning to wreak havoc in face paint.

On Friday The Sun reported that four children in Durham had been pursued by a 'knife-wielding' 'killer clown' on their way to school. 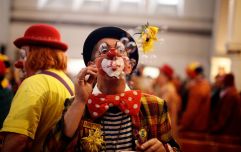 END_OF_DOCUMENT_TOKEN_TO_BE_REPLACED

The man, who wore a mask, a multi-coloured top and had his face painted, jumped out on the kids aged between 11 and 12 and began following them.

Police said they'd up patrols at home time, adding that it was 'very alarming' that he was allegedly carrying a knife. Neighbourhood Sergeant Mel Sutherland did not suspect that the man intended to hurt them, but said carrying a weapon seemed to be part of the prank.

#killerclown is not "cool", it's not "funny" and following school children & causing fear is not acceptable. https://t.co/bvbwyZjGi5 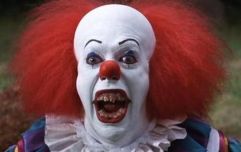 END_OF_DOCUMENT_TOKEN_TO_BE_REPLACED

In Greater Manchester, an Instagram group called 'Bury Clown Attack' named five schools it was targeting, as angry parents told police their children were left in 'floods of tears' by scary clowns outside school.

And it's not just England. In Llanelli, South Wales, 18-year-old Georgia Kitching was walking her younger siblings back from school when she saw a person dressed as a clown.

According to The Sun, he was carrying a bunch of balloons and started running towards them, which left the kids 'hysterically crying'.

Nobody appears to have been physically attacked, but hopefully police can get a handle on the situation before October 31. These clowns aren't very funny.