When a cat just won't suffice, get a shark instead

Police officers discovered a shark-infested pool with a Christmas tree centrepiece while responding to reports in Sussex. 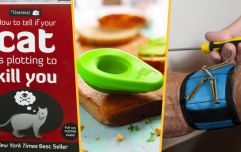 Secret Santa: The top 10 Christmas gifts for under a tenner

END_OF_DOCUMENT_TOKEN_TO_BE_REPLACED

Yes, you read that right.

Officers in Sussex were called to a ground-floor flat in Haywards Heath on Friday (October 8) to respond to reports of a disturbance - but upon entering, the officers found an 8ft aquarium in the front room filled not with koi carp or goldfish but instead numerous sharks.

"Just when you think you have heard it all! Team attended a premises over the weekend, only to discover an 8ft swimming pool in the front room," tweeted Inspector Darren Taylor of Sussex Police.

"In the swimming pool (apart from water) were small sharks swimming around and an artificial Christmas tree in the middle! I kid you not!"

Unfortunately, no further details have been released as of yet, though reports say that the police are talking to the Housing Association about the sharp-toothed pets. It is currently unclear whether the sharks were the cause of the reported disturbance.

The UK has had its fair share of shark encounters recently, though most of them are in the sea where they belong.

Though blue sharks and basking sharks are familiar sights around our coasts, warming seas have also given way to other species checking out our island. Thresher sharks, hammerheads, mako sharks and even great whites have all been sighted concerningly close to our borders, reports the Independent.

Santa gets a boyfriend in tearjerking new Christmas ad

END_OF_DOCUMENT_TOKEN_TO_BE_REPLACED

But despite the constant fear of what lurks beneath our waters, shark attacks and deaths are actually enormously rare. Obvious medical conditions like heart attacks and cancer are far more likely to kill you than a shark, reports Peta.

But you are also more likely to be injured by a flying champagne cork, be mauled by a cow or hit by lightning than a to have a shark seek its teeth into you.