'How can doing nothing be the correct moral decision'

Piers Morgan has criticised the British government for "doing nothing" to help Ukrainians as children continue to spend nights sleeping in bomb shelters.

In a tweet, Morgan said: "Ukrainian children sleeping in a bomb shelter, as Putin prepares to bombard them. How can doing nothing to stop him be the correct moral decision?"

Ukrainian children sleeping in a bomb shelter, as Putin prepares to bombard them. How can doing nothing to stop him be the correct moral decision? pic.twitter.com/j7NsiW7hAF

Piers' post came after he and his son, Spencer, had a "bit of Twitter beef" over the issue of whether NATO should intervene more in Ukraine.

END_OF_DOCUMENT_TOKEN_TO_BE_REPLACED

It started when Spencer tweeted: "If you aren’t personally prepared to fight I don’t think you can call for direct action that will most likely lead to world war 3."

In response, his father said this was a "strange mindset for a journalist."

He continued: "So only serving military can comment on whether military action is justified/necessary when a dictator illegally invades a democratic country?"

When someone asked whether he was "Twitter beefing his son," Piers replied: "We Morgans enjoy a bit of Twitter beef, even with each other." 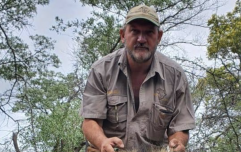 END_OF_DOCUMENT_TOKEN_TO_BE_REPLACED

Spencer then said that fortunately he and his father have brains so "can disagree without falling out."

It seems unlikely that Piers is going to get his wish of more western military intervention in Ukraine though.

On Tuesday, Boris Johnson confirmed that British troops would not fight in Russia under any circumstances.

It comes as pressure grows on the West to introduce a no-fly zone (NFZ) over Ukraine to stop Russian air attacks on the country.

However there are fears that implementing a No Fly Zone would be tantamount to declaring all-out war on Putin and Russia, as NATO would have to start shooting down Russian planes.