The military are preparing to deploy anti-drone equipment after a drone sighting stalled departures earlier today.

Transport Secretary Chris Grayling said: “We are in contact with Heathrow Airport concerning the drone sighting.

"I have already spoken to both the Home Secretary and Defence Secretary and the military are preparing to deploy the equipment used at Gatwick at Heathrow quickly should it prove necessary.”

A spokeswoman from the Metropolitan Police said they were called at just after 5pm to "reports of a sighting of a drone in the vicinity of Heathrow Airport".


Flights from Heathrow were halted but resumed shortly after a drone was spotted flying in the area today. 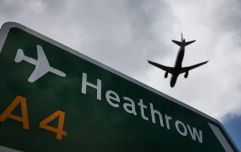 END_OF_DOCUMENT_TOKEN_TO_BE_REPLACED

Scotland Yard said it "received reports of a sighting of a drone in the vicinity of Heathrow airport" at about 5.05pm.
It added that "officers based at Heathrow" were investigating, along with colleagues from the airport.

This disruption comes after a drone led to Gatwick airport coming to a standstill last month.

Heathrow released a statement earlier today explaining that they stopped departures as a precautionary measure while investigations took place.

We are responding to a drone sighting at Heathrow and are working closely with the Met Police to prevent any threat to operational safety. As a precautionary measure, we have stopped departures while we investigate. We apologise to passengers for any inconvenience this may cause.