"I've been held captive under duress."

A man who filmed himself trying to flee hotel quarantine is now on hunger strike, claiming he is being "held captive under duress."

Anthony Pium, 30, flew in from Brazil, meaning he was obliged to quarantine in a hotel outside Heathrow airport at a cost of  £1,750.

He gave his bank details to the authorities but the transaction was reportedly declined due to insufficient funds.

Pium tried to escape quarantine, with video footage of his attempt to leave the hotel showing him telling security guards to "social distance" from him, and threatening to sue if they touched him as he claimed he was "going to get some air."

As a group of security guards blocked his path outside, he accused them all of "breaking guidelines."

The father of one has described his stay in the Radisson Blu Edwardian hotel as "the worst experience of his life," and his failed escape has led to the 30-year-old going on hunger strike.

Pium told the Daily Mail: "I won't touch any of the food they give me."

"They have set meals and I don't know where this is coming from. I'm in a room that isn't well-ventilated and I don't want to get sick while I'm here," he added. 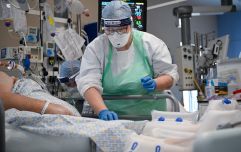 END_OF_DOCUMENT_TOKEN_TO_BE_REPLACED

Pium also said his luggage had been lost on the way to Heathrow airport, leaving him without a change of clothes. His experience in quarantine has also changed his view on the government's handling of the pandemic.

"I'm really upset, I'm really frustrated, and I feel like this is changing my view on how the police and the Government help people in this crisis," he said.

"They already know coronavirus affects people mentally and I've been away from my family for two months.

"Now coming back to my own country feels worse than when I was in Brazil.

"They're trapping me in my room and, to be honest, it's the worst experience of my life."

"The luggage should be here in the afternoon [Thursday] but they can't guarantee it, and in the meantime I have to stay in the same clothes that I've travelled on the flight in for 15 hours.

"It's really embarrassing and unhygienic."

A spokesperson for the hotel said: "At Radisson Blu Edwardian Heathrow, we take our role in assisting the UK government with its hotel quarantine programme very seriously - to help provide a safe and comfortable experience for travellers.

"All staff at our properties have been trained in the Radisson Hotels Safety Protocol which includes mandatory use of PPE along with sanitation and hygiene procedures, as well as regular training for all staff on these procedures.

"Our team is working in partnership with the UK Government-contracted security staff at the property to help keep guests safe and secure.”

popular
TOWIE star Mark Wright is officially the worst player on FIFA 21
A definitive ranking of every swear word from worst to best
'That Vegan Teacher' banned from TikTok after 20,000 people sign petition to remove her
Here's how to see who's been taking screenshots of your Instagram Stories
Princess Anne: Harry and Meghan were right to quit royal duties
Donald Trump's star 'to be permanently removed' from Hollywood Walk of Fame
Ex-Atalanta and Ivory Coast player Willy Braciano Ta Bi dies aged 21
You may also like
Entertainment
Reading and Leeds festivals WILL go ahead this summer
Sport
Tiger Woods "responsive" after surgery on car crash injuries
News
Tiger Woods taken to hospital after being pulled from car after collision in Los Angeles
News
Queen's relative jailed following sexual assault at ancestral home
News
People are calling on the government to make June 21st an official bank holiday
Next Page