The problem with being a high profile figure who takes part in lots of interviews is that invariably those interviews are recorded for posterity. Things you say do, or at least should, matter, and if you say one thing one week, before going back on it shortly afterwards, people will notice it. 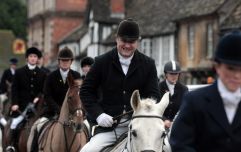 END_OF_DOCUMENT_TOKEN_TO_BE_REPLACED

This is a key tenet of recorded speech which appears to have evaded Dominic Raab, the Conservative party politician who served valiantly as Brexit Secretary from July 2018 to November 2018.

He'll likely bare this in mind in future, after being quite savagely eviscerated on LBC by James O'Brien.

O'Brien undertakes the fiendishly underhand tactic of, erm, playing Raab's own words over the radio airwaves. Those words include, stating that he doesn't support the Human Rights Act, claiming that people who go to food banks aren't in poverty, and admitting - while Brexit Secretary - that he had not in fact read the Good Friday Agreement. To be fair, he did skim it.

After playing the clips, O'Brien asks: "Is it possible that he could be more wrong about everything?

"Even if he woke up every morning and said 'Today I am determined to be the most wrong person in all of Wrongland' Dominic Raab, just being Dominic Raab would be even more wrong."

Watch the compilation of Raab ineptitude yourself below, and revel in the fact that no matter how wrong you have been in your life, you're probably nowhere near as wrong as Raab is on a good day.

popular
'Super recogniser' draws 'accurate' modern Maddie McCann to help police find her
Mum in jail for murder pays tribute to son, 6, killed by his dad and new girlfriend
Chilling video shows moment step mum tried to get away with murdering boy, 6
The JOE Friday Pub Quiz: Week 272
Man suing company after being 'hung upside down like meat' at Christmas party
Bride faints on groom, vomits and gets pooed on during ceremony
Petition to stop interviewing Will and Jada Smith has hit 15,000 signatures
You may also like
News
The 9 scummiest moments from the Tory and Labour conferences
News
Military chief appointed to lead 'far-reaching' review of NHS leadership
News
Tory DWP boss 'entirely happy' with slashing Universal Credit for millions
News
Migrant boats in the Channel can be turned back in new move approved by Priti Patel
News
Government spends nearly £100,000 on Downing Street art
Next Page