Aston Villa captain and England international Jack Grealish has been charged with his fourth motoring offence after allegedly driving carelessly near the club's training ground in October. 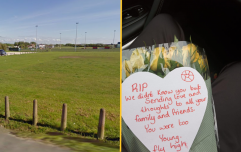 END_OF_DOCUMENT_TOKEN_TO_BE_REPLACED

West Midlands Police told the Express and Star that Grealish is due in court on Tuesday facing three offences relating to an incident which occurred during the first British coronavirus lockdown.

The report states that police have also confirmed a charge made regarding an incident on October in which Grealish allegedly drove carelessly around the site of the club's training ground.

Grealish is due to appear at Birmingham Magistrates’ Court on Tuesday charged with the earlier offences.

The 25-year-old has been in impressive form this season for both club and country, scoring seven goals and assisted four in eight Premier League games.

He was also called up to the England senior squad for the first time, and has impressed since making his international debut in September.

popular
A definitive ranking of every swear word from worst to best
Seth Rogen shocks fans after shaving beard off
Alastair Campbell accidentally announces death of The Queen live on GMB
Remember 'The Game'? Well congratulations, you just lost it again
Dimitar Berbatov compares Romelu Lukaku to Xavi Hernandez and Andres Iniesta
Mum's fury as staff at vegan cafe eject family for bringing ham sandwich in
Man disguised himself as a white guy to commit 30 burglaries, according to police
You may also like
Sport
Former Premier League prospect on the real horrors of youth football
Sport
Richard Keogh awarded £2.3 million in breach of contract case against Derby County
Sport
Derby County in relegation limbo after EFL win appeal over FFP breach
Sport
WATCH: Best goals from Serie A, week 35
Sport
WATCH: The best goals from La Liga, week 35
Next Page