It’s official: holidays are good for you

Tell your boss immediately: you really do need that holiday. It's good for your health.

A team of researchers from Edinburgh University have discovered that frequent trips to sunnier countries are good for boosting your vitamin D, which has a range of health benefits.

The study looked to examine why rates of multiple sclerosis are higher in Orkney, northern Scotland, than almost anywhere else in the world.

Vitamin D is formed in the body after direct exposure to sunlight. There is growing evidence that lack of vitamin D could increase the risk of MS.

Checking the vitamin D levels in blood samples from 2,000 people living on the island, researchers found higher levels of vitamin D in farmers and older residents.

Talking to the Scottish Herald, Emily Weiss, researcher on the project, explained:


"When we probed the higher levels of vitamin D we found they were among the older population that tended to be going away on holiday. They had a bit more freedom with children away at university and a bit more cash... The farmers were not going away as much. We think they just tended to be outside a lot more than the average person. That means when there is a nice bit of sunshine they are really making full use of it." 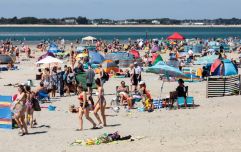 END_OF_DOCUMENT_TOKEN_TO_BE_REPLACED

It appears holiday makers registering levels over 40 nmol (nanomoles) of vitamin D in their blood, with farmers at 35 nmol.

Mrs Weiss said: "Other people who did not go on foreign holidays and were not farmers were under 30. That is significantly less than the farmers."

So there you have it. You need to go out and get more sunshine this summer to keep your vitamin D levels up. It's good for your health.

And when you take in the news we reported about the UK being due another drab summer, we think you ought to go on holiday to get your sun. May we recommend Italy or Greece? Take a look at our guide to the best summer prices.

Just please be mindful of sun screen when you're enjoying the most of the sun. As Hugh Jackman can attest, skin cancer is no joke.

An example of what happens when you don't use sunscreen. Basal cell. Mildest form of cancer. USE SUNSCREEN PLEASE !! pic.twitter.com/phQsRS5QiI

Big summer holiday planned? Let us know at [email protected], or drop us a message on Facebook.