A statement was released in French by ISIS following the terror attacks on Paris.

The Islamic State have today claimed responsibility for the attacks on the French capital that left at least 128 people dead. 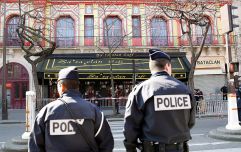 END_OF_DOCUMENT_TOKEN_TO_BE_REPLACED

In the statement, which was released in French this morning, ISIS claimed that “France and those who follow its path must know that they remain the principle targets of the Islamic State” and that the locations at which the shootings and explosions were “specifically targeted in advance”.

The statement, which you can read in full below, referred to President Francois Hollande as “a fool” and said that the attacks were in response to insults to the Prophet Mohammed and French air-strikes in Islamic State-held territory.

The statement finished with a warning that the “attack is the first of the storm and a warning to those who wish to learn”.

ISIS statement in full (as translated by news.siteintelgroup.com)

Urgent: Statement about the Blessed Paris Invasion on the French Crusaders

In the Name of Allah, the Most Gracious, the Most Merciful

The Almighty said: “And they thought that their fortresses would defend them from Allah! But Allah's (Torment) reached them from a place whereof they expected it not, and He cast terror into their hearts so that they destroyed their own dwellings with their own hands and the hands of the believers. Then take admonition, O you with eyes (to see).” [Al-Hashr: 2]

In a blessed attack for which Allah facilitated the causes for success, a faithful group of the soldiers of the Caliphate, may Allah dignify it and make it victorious, launched out, targeting the capital of prostitution and obscenity, the carrier of the banner of the Cross in Europe, Paris… Youths who divorced the world and went to their enemy seeking to be killed in the cause of Allah, in support of His religion and His Prophet, Allah’s peace and blessings be upon him, and his charges, and to put the nose of His enemies in the ground. So they were honest with Allah, we consider them thusly, and Allah conquered through their hands and cast in the hearts of the Crusaders horror in the middle of their land, where eight brothers wrapped in explosive belts and armed with machine rifles, targeted sites that were accurately chosen in the heart of the capital of France, including the Stade de France during the match between the Crusader German and French teams, where the fool of France, Francois Hollande, was present.

[They also targeted] the Bataclan Conference Center, where hundreds of apostates had gathered in a profligate prostitution party, and other areas in the 10th and 11th and 18th [arrondissements] and in a coordinated fashion. So Paris shook under their feet, and its streets were tight upon them, and the result of the attacks was the death of no less than 100 Crusaders and the wounding of more than those, and unto Allah is all praise and gratitude.

Allah had granted our brothers their wish and gave them what they loved, for they detonated their belts in the gatherings of the disbelievers after running out of ammunition, we ask Allah to accept them among the martyrs and make us follow them.

Let France and those who walk in its path know that they will remain on the top of the list of targets of the Islamic State, and that the smell of death will never leave their noses as long as they lead the convoy of the Crusader campaign, and dare to curse our Prophet, Allah’s peace and blessings be upon him, and are proud of fighting Islam in France and striking the Muslims in the land of the Caliphate with their planes, which did not help them at all in the streets of Paris and its rotten alleys. This attack is the first of the storm and a warning to those who wish to learn.

“But honor, power and glory belong to Allah, and to His Messenger (Muhammad), and to the believers, but the hypocrites know not.” [From Al-Munafiqun: 8]

popular
Omicron symptoms: What you should be looking out for
Scotland international rugby star Siobhan Cattigan dies aged 26
Ronaldo comments ‘FACTS’ on fan boy Instagram post criticising Messi’s Ballon d’Or win
Pilot claims Prince Andrew was on Epstein plane 'Lolita Express' during Maxwell trial
Leeds condemn homophobic chanting aimed at Crystal Palace's Conor Gallagher
Heinz have just created a Terry's Chocolate Orange mayonnaise for Christmas
QUIZ: Who plays here? Match the clubs to these 50 stadiums
You may also like
Sport
Euro 2016 games will be played behind closed doors if there is a security issue
News
Russia replaces French police dog killed during Paris raids (Video)
Entertainment
Eagles of Death Metal perform on a Paris stage less than a month since the Bataclan massacre (Video)
Entertainment
U2 pay touching tribute to victims of Paris terror attacks (Pics)
Entertainment
Bono made a sound gesture for Eagles of Death Metal after the Paris attacks
Next Page