A hospital in Barnsley has broken under the immense pressure felt by an onslaught of patients to their A&E. The NHS has warned of increasing numbers, a cry which has not been heard by government officials. 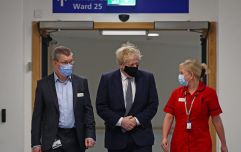 Everything we know about new 'stealth Omicron' strain

END_OF_DOCUMENT_TOKEN_TO_BE_REPLACED

The black alert was issued on Tuesday, which is described as “struggling or unable to deliver comprehensive care” and puts the safety of patients at risk. The Independent reports that the increase of patients has meant numbers of up to 80 patients are waiting in the emergency room, with a further 20 looking for beds.

Staff were encouraged to “do everything possible” to free up beds, including early reviews of all inpatients and “encouraging medical teams to facilitate discharge”. The increase in hospital demand was expected, but some patients are waiting up to nine hours to be seen.

According to documents seen by The Independent, the influx of patients is not related to Covid.

But this issue is popping up across the country, with numerous hospitals struggling to cope with an increasing number of patients. Emergency units are seeing a record number of arrivals, though most of these are not related directly to the pandemic.