Harry Kane reveals dreams to play in the NFL after football

Potentially the first man to play both footballs

Harry Kane has spoken to JOE about his dream to one day play in the NFL, and his friendship with the American football GOAT Tom Brady. 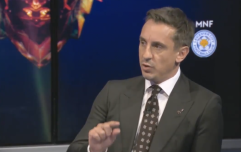 END_OF_DOCUMENT_TOKEN_TO_BE_REPLACED

Kane is a massive NFL fan and supports the New England Patriots, the team that Brady led to extraordinary success for two decades, winning six Super Bowls. He then left for the Tampa Bay Buccaneers and casually guided them to a Super Bowl victory in February.

Kane spoke of how he has aims to play in the NFL - as a kicker of course - after his career in soccer (the only time we'll call it that) is over, and his admiration for Brady, who is widely regarded as the greatest NFL player of all time and one of the world's greatest athletes.

"At the moment I've definitely got more of an eye on the NFL [than a career in coaching] and trying to pursue that as a career after football," the Tottenham talisman said.

Speaking about Tom Brady and the debate around who is the greatest athlete in the world, Harry said: "He's definitely the best the NFL has ever seen, that's for sure. To do what he's done, and I think this year for him to go to a new team and continue winning the Super Bowl, it's not easy.

"He's a great guy, I've had the pleasure of talking to him, getting to know him a little bit. He's just a real down to earth person.

"He's got that infectious way about him, just to win and to be positive." 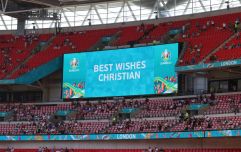 END_OF_DOCUMENT_TOKEN_TO_BE_REPLACED

Harry revealed that after meeting Brady after the Super Bowl in 2019, the two even exchange messages every now and again, with Brady often wishing him luck.

"We just had a brief chat," he said. "But I think the way he talks, even when we message on Instagram, him giving me good luck messages before big games. Or if things didn't go that well, he just says things to keep me positive and things like that. You can tell he's a real leader.

"Obviously if I was an NFL player I'd love to play alongside him!"

When asked if the prospect of becoming the first person ever to play both football and American Football professionally was a motivation, Harry replied: "I think so, definitely.

END_OF_DOCUMENT_TOKEN_TO_BE_REPLACED

"So that's definitely motivation for me, to be one of the first people to ever do that.

"Like I say, it's still early days yet, but late 30s, if I'm still in good enough shape, I'd love to give it a go and really try to take it on as a career."

And as for potentially moving his family to America?

"We haven't really spoken about it yet, that will be a conversation further down the line!

"But we like America, I love American sport, so for me it would be great."

You can watch the full conversation about all things NFL below, and you can find the full interview with the England and Spurs striker on YouTube by clicking here.

“To be able to play two major sports at the highest level would be an incredible feeling.”