Products including Dolmio and pasta were "strictly not for sale"

A shopkeeper in Stoke has gone viral after he banned customers for buying any Italian food from his store ahead of the Euro 2020 final.

END_OF_DOCUMENT_TOKEN_TO_BE_REPLACED

Avtar Singh, who runs a Nisa store in Stoke-on-Trent, shared a post on Facebook which included pictures of his stock. Yellow and black tape can be seen over the fridges and shelves containing Italian products.

This included everything from pizza to pasta, garlic bread to ragu.

The post read: "We at Nisa take football very seriously!!! Therefore pasta, pasta sauces, Dolmio, Ragu and pizza are all out of bounds and strictly not for sale.

"Nothing Italian will be sold. Goooo England! It's coming home!"

Throughout the tournament, Avtar's shop has been clad with England football decoration, and the football fanatic is continuing the trend.

END_OF_DOCUMENT_TOKEN_TO_BE_REPLACED

Mr Singh told BlackCountryLive: "It was a comedy thing for the local estate. I've run this shop for the last 10 years and have become well integrated into the community.

"Football has become a joint enjoyment for us all. We got together to decorate the shop and thought it would be a laugh to tape off the Italian-based foods as a joke and say they are no longer for sale."

He did point out though that customers would be able to get their pasta/pizza fix of they wanted and that the 'ban' is just for "comedy purposes." 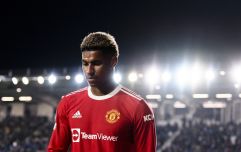 END_OF_DOCUMENT_TOKEN_TO_BE_REPLACED

Avtar said: "Around 99.9% of my customers have found the idea humorous and theatrical. In no shape or form is it intended to be harsh or contradictory. I'm British, love football and support the England team. It has brought the community together.

"We haven't stopped selling pasta and garlic bread it's just for comedy purposes.

"A big thank you to the Blurton Community for being supportive, crazy football fans and having a sense of humour towards my post.... COME ON ENGLAND!"

popular
Antonio Cassano reveals Cristiano Ronaldo ordered him to 'respect' his achievements
'Super recogniser' draws 'accurate' modern Maddie McCann to help police find her
Mum in jail for murder pays tribute to son, 6, killed by his dad and new girlfriend
Chilling video shows moment step mum tried to get away with murdering boy, 6
Jack Wilshere could be set to resume career with National League Wrexham
The JOE Friday Pub Quiz: Week 272
'I did three grams of coke during a game': Inside football's problem with Class A drugs
You may also like
Sport
Antonio Cassano reveals Cristiano Ronaldo ordered him to 'respect' his achievements
Sport
Liverpool's Diogo Jota somehow manages to miss easy finish against Wolves
Sport
Former Chelsea technical director Michael Emenalo rejects role at Newcastle
Sport
Raphael Varane opens up on playing alongside Harry Maguire
Sport
Lionel Messi admits he would sometimes like to go 'unnoticed'
Next Page